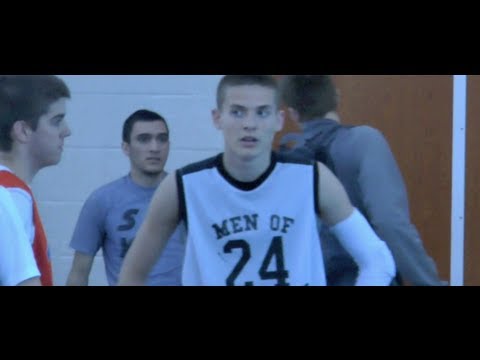 If there’s one thing 2016 prospect Kyle Guy avoids, it’s categorizing himself as a player. The Indianapolis native sees himself as simply a competitor — whatever a coach asks him to play, he’ll play it. Even at his current height of 6-foot-2.

“I’m a fearless competitor, that’s for sure. You put me on a one, I’ll do my best to shut him down. You put me on a five, I’m going to battle until he’s tired and I’m not,” Guy said during an interview on Saturday. “The advantages of my game I’d have to say are my pull-up jumper and the way I see the floor. I think I do that better than most people at this age. I also rebound very well for my size. I led my high school team in rebounding this year.”

This fearless edge to Guy’s game, along with his decision to play up two grade levels the 17U team of Men of the Family this summer during AAU season, has led to high-major interest across the Midwest, including out of Ann Arbor.

Guy said his decision to play up, while a tad risky, turned out to be a sound one.

“I’d say it was a very successful year,” Guy said. “I wouldn’t say I took a chance, but I decided to play up with 17U, with Men of the Family to play with some experienced players and play against college bodies, because I’m never going to play with kids in my age group again. That helped me tremendously, I feel like I excelled. It was just a great experience.”

Playing up allowed Guy to showcase his skills on the big stage, and schools all over the Midwest, including many Big ten programs, took notice. Guy said he has received interest Michigan, Ohio State and Indiana, Purdue and Iowa. Indiana liked him so much, in fact, that the Hoosiers offered Guy last week and he took a recent visit to Bloomington. Guy now holds offers from Indiana and Indiana State.

As for Michigan, Guy said he speaks often with Wolverine assistant coach LaVall Jordan — “at least once a week,” he says. Their conversations center mainly around his game and his potential visit to Ann Arbor.

“We obviously talk about my game, what I need to work on, stuff like that,” Guy said. “Then we talk about my visit that I’m going to take there in the fall for a football game and stuff.”

Guy said he does plan on making the trip to Michigan in September, along with trips to Xavier on August 17th and Tennessee on August 31st. He will also visit Ohio State in September.

Guy has developed a strong relationship with Jordan, and he said part of what draws him to Michigan is it’s history of winning.

“I like that it’s a historically winning program and a historic program, generally,” Guy said. “I really like the coaching staff — coach Jordan is just fantastic, I like him a lot. I haven’t met coach Beilein but I’m sure he’s great too. I just like Michigan. It’s a great school.

“I liked how the players have freedom. They can’t just do whatever they want and they have boundaries, but the coaches give them a little freedom to do what they want. I think that helps them a lot and I just like the way they play.”

For now, as a 2016 prospect and with plenty of time, Guy plans on just improving his game any way he can.

“I’m a true believer in you’re never perfect, so I work on all aspects of my game whenever I can, whether it’s a two-ball dribble or just getting shots up, working on defense, anything that can help I work on,” Guy said.

This fits with Guy’s mentality of making sure he has the skill set to be a player who can truly do it all. Guy realistically expects to play either the one or the two in college, and said he’s working on his point guard play.

However, if it so happens that at any point Guy is called upon to play center, know this: he’ll be ready.

“I’ll play wherever the coach wants me to play, whether it’s the one or the two, which is probably the most likely for me,” Guy said. “I’ve been working on playing point guard a lot this summer, so I can run the offense, I can pass when you need me to, I can score when you need me to and I can be a leader — whether it’s at the one or the two or the five, it doesn’t matter, I’ll be a leader. If I’m the two I’m going to shoot when I’m open, create for others. I can pretty much fit in anywhere that Michigan wants me.”