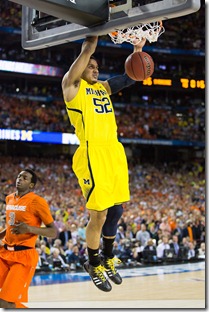 Jordan Morgan’s career at Michigan has seen plenty of highs, but he’s also faced more than his fair share of adversity. He was overlooked as a high school prospect and suffered multiple injuries before he was able to even get on the floor in college. He battled injuries again as redshirt junior as he suffered a sprained ankle mid-way through the season. He was never able to recover fully from that injury and watched as Mitch McGary replaced him in the starting lineup and carried Michigan to the championship game.

As bittersweet as Michigan’s NCAA tournament run might have been for Morgan, he kept his head down and kept working. After playing just 12 minutes total in the first four tournament games, Morgan was ready to play 21 strong minutes against Syracuse in the Final Four with a critical drawn charge and dunk late.

Morgan’s per-game scoring averages have decreased steadily over the course of his career – from nine points to seven to five – but he has been a steadying force in the center of Michigan’s lineup for three seasons. Morgan has never been spectacular but he’s always been solid – and that’s something that many have probably taken for granted.

Morgan still had his moments but his injury riddled season never really got off the ground. He only reached double figures five times all year and saw his playing time significantly reduced.

Bottom Line: Morgan could have packed his bags and played his senior year somewhere else. There’s little doubt that Mitch McGary will be “the guy” in Michigan’s front court and the effect that can have on Morgan’s playing time was obvious in the NCAA tournament. Morgan graduated with an engineering degree in the spring and would have had immediate eligibility anywhere in the country to start on his masters.

But Morgan stayed to battle. He’s fought through just about everything else during his time in Ann Arbor and one more challenge isn’t going to cause him to quit.

Morgan has had bright spots and clearly was never healthy after his January injury. There is a very important role for him to play on this team but the adjustment will be difficult. Michigan needs him for his leadership – he’s an ideal captain candidate – but he might play fewer than 15 minutes per game. For a player that’s started 92 games in his career, that’s a difficult thing to swallow. Morgan’s transition will be difficult but his role is also necessary and front court depth could be a critical strength for the 2013-14 Wolverines.