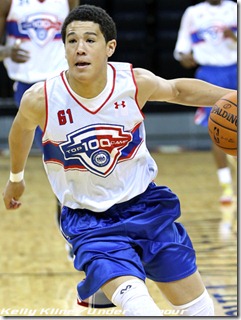 The July evaluation period is in the books and the basketball recruiting world have already began to roll into the next phase. August means visits, offers, lists and commitments. It also means that Michigan could finally see some recruiting movement after landing just one commitment in the last 15 months.

Michigan’s class of 2014 targets have stuck to their guns and stuck to their timeframes. For some, but not all, that has resulted in a number of new scholarship offers. With July in the books and the fall fast approaching, those originally scheduled timeframes have arrived. It’s decision time for the class of 2014.

Devin Booker, Kameron Chatman, Trevon Bluiett have all discussed making their college decisions before the early signing period, which begins on November 12th.

An official visit is already on the books for Chatman, who is down to a top five of USC, Oregon, Arizona, Michigan and UConn. Chatman visited USC last Wednesday and is planning officials to Michigan (September 6th), Oregon (September 13th), and Arizona (September 27th).

Bluiett named the Wolverines in his top seven of Michigan, Butler, UCLA, Indiana, Purdue, Xavier and Arizona. His official visit to Michigan could be August 31st for the football season opener.

Booker plans to announce his top five by the end of the month and told us in July that he hopes to bring both his parents on an official visit to Ann Arbor.

Michigan has its top targets and is in a fairly good position across the board. Closing the deal this fall will be key as the Wolverines could end up with a dream class of Booker, Bluiett, Chatman and Doyle or find themselves searching for plan-Bs come late November.

While Midnight Madness events are a high profile visit weekend for many schools, Michigan has a resource that many other perennial basketball schools don’t: high profile football weekends to host official visits.

Michigan opens the season with three home games, none bigger than the Notre Dame night game on September 6th. The atmosphere will be electric and the Wolverines will likely try to bring in their priority recruits in hopes of selling a package deal.

Kameron Chatman has already announced that he’s taking an official visit to Michigan for the Notre Dame game and he won’t be the last. While night games might not be the best for football visits – there’s no night out – there couldn’t be a better environment to host basketball recruits.

Big football games aren’t just good for officials either. They are a great opportunity for unofficial visits as well. A trip up to Ann Arbor sounds a lot more appetizing to take in the Michigan-Notre dame night game. Class of 2016 forward TJ Leaf, a 4-star player, is making the trip for the weekend. Look for a host of other underclassmen to make the trip to Ann Arbor for Under the Lights II as well.

Many will remember the infamous picture of Mitch McGary jumping up and down in the rain at Michigan Stadium, one of many successful recruiting weekends at the Big House. Trevon Bluiett is expected to be on campus for Michigan’s opener.

3. Combo forward is a serious need

Michigan’s 2014 class is still very much in the balance and the news that Kevon Looney won’t even be visiting Ann Arbor is certainly a blow. Michigan’s class can still be strong without Looney but the fantasy of adding a top-ten player to the group was always nice. The good news is that with Looney out the door, Michigan can focus on more realistic options.

Michigan is recruiting like Glenn Robinson III and Mitch McGary are likely headed to the NBA – and frankly they have no other choice – which means that there’s a massive void at the combo forward position.

We profiled a number of new names on the radar earlier in the week and all appear to be serious targets, there is also one name on the radar that has been there for quite a while: Jaylen Johnson.

Johnson continues to trend upward and is a rugged option at the four spot. He’s impressed pretty much everywhere he’s been this summer and was invited to several prestigious events including Adidas Nations and the LeBron James Skills Academy. There’s competition though as the Ypsilanti native is a “priority” for Louisville and also has a Michigan State offer. Johnson is slated to visit Michigan today, which could be the first step toward Michigan making up ground in his recruitment.

Johnson, Donte Grantham, DJ Wilson, Josh Cunningham and Jonah Bolden make up Michigan’s 2014 combo forward board, the next step is to prioritize them. Watch carefully for any of these combo forward targets in the class to make the trip to Ann Arbor, if they do then mutual interest is strong.

Michigan’s class of 2015 recruiting continues to hang in the balance based on the results of the 2014 class. John Beilein has only extended three scholarship offers in the class – all to top 35 players – and can’t really know what he actually needs in the class until the notable ‘14 prospects make their choices. Michigan can afford to be selective with 2015 offers until some of the dust settles after the November early signing period.

Luke Kennard, Jalen Coleman and Jalen Brunson have been at the top of Michigan’s class of 2015 recruiting board and all three prospects impressed this summer and earned additional major offers. Kennard added offers from Kentucky, Duke, Michigan State, Louisville and North Carolina. Brunson and Coleman were both offered by Ohio State.

Of the bunch, Coleman appears the most likely to make an early decision and he’s expect in Ann Arbor this fall. While Kennard is quick to note that he might accelerate his timeframe if it feels right, he also has publicly stated that he wants to decide by the end of his junior year. Brunson has made it clear that he’s in no hurry to make a choice.

Then there are the prospects that have yet to receive an offer. Stephen Zimmerman, Sedrick Barefield, Diamond Stone, Dwayne Bacon and Carlton Bragg appear to make up the next group of prospects that are close to earning a Michigan scholarship offer for various reasons – typically visits or transcripts. This group doesn’t require any extra evaluation but mutual interest can still be gauged by how quickly a visit to Ann Arbor is setup.

Corey Sanders, Evan Boudreaux, Hyron Edwards, Noah Dickerson, Nate Fowler and a number of others had a strong summer and will continue to be evaluated. The list of targets in the ‘15 class is likely to grow not shrink as Michigan expands its net after July, but it’s also hard for Michigan to make a move on this group until there is movement with either the higher priority or older prospects. Unofficial visits are also critical here as Michigan’s highest priority targets will be setting up unofficials in the fall. Those that are falling off the radar probably won’t be in Ann Arbor.