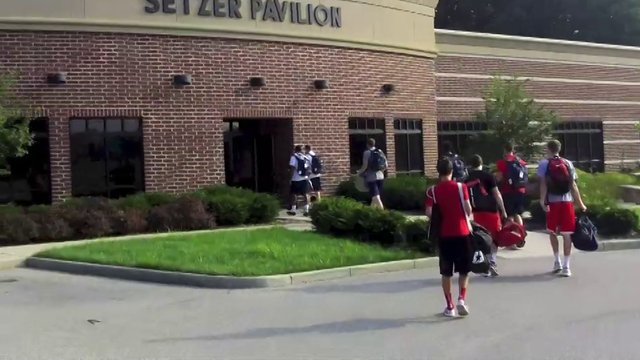 Housekeeping: We’ve added a Videos page to the menu along with an archive of all recruiting videos and media availability videos that we’ve posted previously. We’ll be adding a few more video pages before the season.

Jordan Morgan missed significant game time last year with an ankle injury and is finding an opportunity to travel the world, help the community and get some extra playing experience this summer by traveling to the Ivory Coast with Athletes in Action.

Morgan is overseas with nine other college players including Detroit native (and 2013-14 opponent) Sherron Dorsey-Walker and Ohio University forward Nick Kellogg. Dayton assistant Eric Farrell, CBS Sports’ Clark Kellogg and St. Louis University assistant Mike Lepore are coaching the team overseas. Morgan is keeping a video blog and is also tweeting about his experience. The Athletes in Action team is also posting to a team blog.

Chad Ford released an updated big board for the class of 2014 draft, which he teases “could be the best draft class ever”. Ford has Robinson at No. 13 and McGary at No. 16.

Like Harris, Robinson also would’ve been a likely lottery pick in 2013. He is one of the best athletes in the country and quietly put together a terrific freshman season at Michigan. With Trey Burke and Tim Hardaway Jr. off to the NBA, the burden now falls on Robinson and teammate Mitch McGary to carry the load for the Wolverines. Robinson needs to get stronger and keep polishing that perimeter game, but scouts are very high on his future.

I was pretty surprised that McGary decided to ditch the 2013 draft. After his dominant performance in the NCAA tournament, his stock was as high as it’s likely ever to be given that he’s old for his class at 21. Now he has to live up to expectations that will be very hard to match. I love his toughness, energy and his skills around the basket — but he’ll be under a microscope this season and given that Trey Burke got him lots of easy buckets, scouts are a little more cautious when trying to project his draft status next season.

McGary and Robinson are firmly projected as top-20 picks right now but they also have a laundry list of improvements to make during their sophomore seasons if they are going to stay at that spot.

Booker’s 247 Sports Crystal Ball shows 91% Michigan and 9% Kentucky while Michigan State has made a late push and his dad is in the Hall of Fame at Missouri.

He also had a busy summer. He played in the Nike EYBL, he attended just about every invite only camp and also participated in the Nike Global Challenge with Team USA. Despite the AAU evaluation season ending in July, Booker still isn’t done adding dates to his calendar.

He was invited to the Elite 24 All-Star game on August 24th. The game will be held outdoors in New York City underneath the  Brooklyn Bridge at the historic Tobacco Warehouse. ESPNU will televise the event which begins at 7 p.m. eastern.

Booker’s Moss Point squad is also scheduled to attend the Marshall County Hoopfest in Benton, Kentucky on December 6th and 7th. The high profile high school event features a number of top prospects, many of whom are considering Kentucky.

A pair of Michigan targets on the West coast were profiled by local newspapers, taking a look back at their busy but productive summers on the basketball circuit.

Kameron Chatman was featured in the Gazettes.

But the heavily-recruited senior-to-be has been doing too much traveling to rest, or to spend much time with his family. Instead, he’s been logging frequent flier miles while traveling from Long Beach to Portland, Seattle, Las Vegas, New Jersey, Washington, DC, Texas, and Virginia. Such is the life of an elite basketball player in the summer before his senior season, when colleges are doing their major evaluations. And because the events he’s been in are high-profile, big-money ones, Chatman hasn’t just been traveling, he’s been traveling in style.

“This whole summer, I’ve gotten spoiled,” he laughs. “I actually started getting used to cars picking me up with my name on them, all you can eat food at hotels, DJs in the hotels, all that stuff.”

Sedrick Barefield was profiled by The Press Enterprise with most of the focus on his Adidas Nations experience.

“The first couple games I was struggling,” he said. “I was turning the ball over and wasn’t being myself. One of the coaches was on me really hard. We had a really good talk. He told me to just be a true point guard and not worry about scoring and just let the game come to (me). Ever since then, I feel like I have been playing a lot better and I’ve figured some things out.”