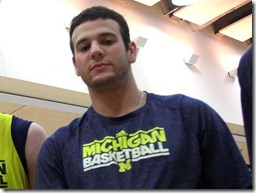 Part two of our conversation with Josh Bartelstein he discusses Trey Burke’s development, the early highs of Michigan’s season, the Big Ten drought and more.

More: The Book | Mitch McGary and the NCAA tournament | The Final Four | Fab Five & Next Season

Was there anything that happened before the season that indicated to you what kind of a year Trey Burke was set to have?

I always knew that Trey was going to be good — but never this good. I knew because of the first open gym he ever played, going into his freshman year at Michigan, around June 28th when we reported two years ago. You could just see in the way he played. He won every game. Every team he was on was winning. He was pulling up from so deep. He had a swagger about him — he knew he was good and he just played like it. I think everyone respected that. So obviously he had a great freshman year. And then I think last year, at first when he decided to come back, he wasn’t all in at first. He wanted to go to the NBA, he didn’t want to go to school for another year. Then he came back in the summer, last June, after going to all these LeBron camps and Kevin Durant camps, and he was such a different player athletically. His eurosteps were tighter, he was bigger, he was quicker. And Trey, he’s not a big guy so he needed to create space and be able to finish. He just worked so hard on his body. So last summer I saw the transformation of a guy who was a good college player into a pro playing among college players.

My freshman year, we didn’t really have a culture. We had a lot of talks about how important it was to play for Michigan, but we didn’t really have a rhythm down, we didn’t have core values, and I don’t think everyone was really playing for the program. Coach talked about how it’s the player’s team, but it’s the alumni’s program. The guys who came before us, it’s their program. I think this team, when we had guys like Cazzie Russell come and talk to us and Glen Rice, they all came in and talked about how much they loved watching us play, and we felt like we had a duty to carry out the way Wolverine basketball is played. And I just think we were playing for something bigger than ourselves. It was almost like a higher power. Obviously we had incredible players, but it was knowing that we had a legacy that we needed to hold to and you’d better know it if you’re going to play there.

After seeing how the coaching staff developed players like Zack Novak and Stu Douglass, was there a sense of “watch out” when you thought about what Michigan’s coaches could do with players like Glenn Robinson III or Mitch McGary?

You can teach a lot of things, but you can’t teach Glenn Robinson III’s athleticism or how athletic Mitch McGary is. Those guys can’t really control that. And then when I saw what kind of basketball IQ they had, I was like, the sky’s the limit. Give a ton of credit to Mitch for all that he did, but coach BA [Bacari Alexander] and coach Beilein worked with him one-on-one more than any player that I’ve been around in my four years. He was there before practice, after practice, working on his footwork and finishing. And it paid off. That’s why when Mitch, during the season, was a little frustrated with his playing time and production, coach just told him to put in the time and it’ll pay off, and it did. And there are plenty of guys who would have probably said, ‘This is not for me, I’m a five-star recruit, I can go anywhere now and play 30 minutes.’ But it shows the kind of character he has that he stuck with it. Also, let me say that I believe — and I worked with coach (LaVall) Jordan the most — coach Jordan is going to be a big-time, big-time, big-time head coach. BA is going to be a big-time, big-time, big-time head coach and coach (Jeff) Meyer could be a head coach at any place he wanted. They’re that smart and they’re that good. In five years, I expect LaVall and BA to be going up against each other in a high-major clash just because they recruit, they’re so smart and they can really develop players. Those guys are really talented at their job.

Let’s talk about the non-conference slate. It’s the early part of last season and Michigan is rolling. You guys beat West Virginia, NC State, Kansas State and you’re making it look easy. Did you feel a responsibility to keep the young players grounded, knowing that the Big Ten season was looming, even though you all were playing so well?

That was my biggest fear. I understood how hard college basketball was. My freshman year was the hardest time of playing basketball ever. And even all the other years, we got really good, but it’s incredibly hard. And then we got off to that 16-0 start, and it wasn’t just that we were 16-0 — it was how easy it was. Madison Square Garden, two tournament games, NC State, it was just the team playing so incredibly well and there was this feeling that Michigan can’t be stopped. Once the Big Ten season got into full swing and teams were scouting us and the freshmen hit that wall, it was going to be hard. The biggest thing is that when you lose, the next day at practice, there’s a sense of urgency. If you win, you let off the gas a little bit. You tell the guys they have to go harder in practice, but it’s hard to make a point when you’re 16-0 and you’re ranked number one in the country and everyone won’t stop talking about you. So what I was most worried about was that we would lose our desperation, and I think you saw that we lost that desperation in practice, where we didn’t work as hard, they didn’t want the freshmen to get tired. And all the sudden we’ve got a losing streak because we’ve been sloppy, especially defensively. In the beginning of the year we spent so much time on defensive principles, and then we said, ‘We’re doing so well, let’s not worry about that,’ as players and sure enough, against teams we should have been beating by a lot, we were just really sloppy on defense.

Tell me about that brutal stretch of the Big Ten season where you guys played Indiana, Wisconsin, Ohio State and Michigan State in a span of 10 days. Looking back, what sort of effect did that time have on the team?

When I get the schedule every year, I kind of go through and look at stretches like that, home and road games, what time you play, stuff like that. I think about it and I try to predict every game. And I thought we could go 2-2 in that stretch and be pretty good. It’d be beating two top-15 teams and losing to two top-15 teams. You’d like to go 3-1 but you take what you can get. And the fact of the matter is we were a half-court shot away from being 2-2 in one of the toughest places to win in the country. In my opinion, there’s no question about it, our worst game of the season was that loss at Michigan State, and that was a direct result of us not overcoming that Wisconsin loss. That Wisconsin loss was a really tough loss. People talk about the season and how it was crazy how far we got, but we had some brutal losses: at Wisconsin, brutal loss; the game at home against Indiana, to win the Big Ten, brutal loss; at Penn State. Just losses where you’re just demoralized. I think what that did was it put a little urgency back into us. We’re right there. That Indiana game, that Wisconsin game, those are only games that national championship contenders win. It made us go back to the drawing board a little bit and say that if we improve these things, we can really beat anybody. A week ago, I watched my interview with UM Hoops after we lost to Indiana and I said that after this game, we should be demoralized.

When you set your goal as winning the Big Ten championship, it should hurt. We invested so much time. But I want Trey Burke shooting that shot every single time, I want Jordan Morgan making that clutch play every single time. And you fast forward, Trey Burke’s shot against Kansas was the same situation, and Jordan Morgan with the charge he took against Syracuse, he made the clutch play. It’s a huge learning curve. I know it’s cliché and you hear coaches say it. But all those games and being in those situations, even though we lost, we learned so much about how you win and how you play. That’s why we played so well in the tournament — because we’d been there before. Those young guys weren’t so young anymore because they knew what to do.