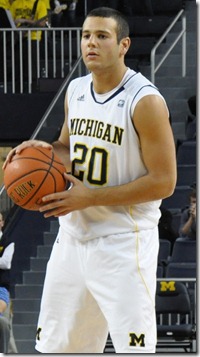 Recently-graduated former Michigan basketball captain Josh Bartelstein has returned to the United States after spending some time abroad, and he brings good news: He will be releasing, along with Zack Novak, an e-book chronicling the Michigan basketball team’s rise to prominence over the past three years, with a specific focus on this past season. We sat down with Josh to talk in detail about his new book, last season’s NCAA tournament run and much more. Stay tuned for subsequent installments over the next couple of days. Here’s part one, focusing on Bartelstein’s e-book. (Photo: iSportsWeb)

What have you been up to this summer?

This summer, I traveled a lot. One of the things as a student-athlete that you don’t get to do is go abroad — you don’t really have any free time. So I went to Israel, France and Spain this summer. For the first time in a long time, I didn’t have to worry about working out or the food I ate. Just to be a normal person was nice. Then, I got back and I’ve been doing a lot of leadership speaking, motivational talks with different schools, different companies and basketball camps. I’ve been doing that all over the Midwest. Speaking about how you can build a winning culture and how everyone’s got such an important role. And the other thing I’ve been doing is working on my blog, which is being turned into an e-book. So I’m really excited about it. Zack Novak is part of the book team — I have stuff from him and Tim (Hardaway Jr.) and Trey (Burke) and Stu (Douglass) in there, a bunch of behind-the-scenes videos and blogs from on the road that they wrote. I think it’ll give fans something to hold on to remember this really special year.

Describe the book. How is it constructed?

It’s going to be an e-book. It’s going to be on iTunes and Amazon and Kindle and everything. It’s going to have all of my blogs over the last three years. One thing I want is for people to see how this program has changed so drastically over three years between players that have come in, from making the NCAA tournament to winning the Big Ten to making it to a national championship. The program, really, was built over the last three years. If you read it through the last three years, people who love the program, you’re going to get a big smile on your face because you’ll see how it slowly changed. But what it’s really going to focus on is this year and how special it was. It’s going to have every blog I’ve ever written, and I probably wrote six to eight new things that take you more in-depth and give you a minute-by-minute breakdown of the Final Four week. Trey, Tim, Stu and Zack write how they each changed the Michigan basketball program. Zack wrote about meeting coach Beilein one-on-one and how they created the culture and how much Michigan means to him; Tim wrote about how much he’s grown up, and same with Stu. I think the coolest thing is that teammates sent me videos, from being on the team plane doing the Harlem shake to cutting down nets to two in the morning and people waiting for us at Crisler. There are so many awesome videos from players and from fans too, celebrating in Atlanta. That’s all going to be in this book. It’s going to be a way to see, from every angle, what it was like this year.

So it’s really a multimedia experience rather than a straight book.

Totally. It’s going to have tweets from guys, it’s going to have snapchat videos of us on the bus. It’s going to have everything from social media in it, and it’s all to show how special this year was. There’s a video of us running out of the locker room for the national championship game and the fireworks going off and it’s awesome. It’s from people all around the world watching on TV or if you were there. If you weren’t in Atlanta, by the time you’re done reading this book, you’re going to feel like you were in Atlanta.

You accepted submissions from fans and other players?

A lot of it is from guys on our team, and they were awesome about sending me videos and pictures. But a lot of it’s also from friends I have at Michigan who took videos of things like the Maize Rage entering the arena. And I also got videos from people I’ve never met in my life, but who wanted to share their experience in the e-book. I think it’s really unique and everybody sort of fell in love with this team, I think it’s a way for their kids in ten years to look at how this team got there and be able to track not just how we got here but how the program got here.

Can fans expect any behind-the-scenes material?

I think of two things as I’m going through it: Zack was in charge of the foreward, and I think he wrote a really impressive foreward on how Michigan changed in his eyes and all the meetings he had. There’s so many things that go into planning and putting a program like this together. Zack wrote a really great foreward, and you’ll see the decisions they made and why they made them. I wrote 14 pages of inside Final Four week. From the minute we beat Florida to the minute the buzzer rang and we lost to Louisville, you’ll know exactly what we were doing, what the coaches were doing, what our families were doing, the police escorts, the security guards, where we ate dinner, everything is documented. I compare it to Super Bowl week. Everyone makes such a big deal about what a circus Super Bowl week is — well, in the Final Four you have that circus and maybe even more because you have four teams there. Watching these videos and writing about it, you get the chills again.

When does is come out?

We’ll release it around Labor Day. I’ll say within the next 10 days or two weeks we’ll have a pre-order up, which will hopefully be on UM Hoops and blogs and Amazon where you can pre-order it. It’s only going to be about eight bucks. But it’s really just to get the fans to understand how cool this was and have them hold onto something — them being able to see it and hold onto it for a long time.

What gave you the idea for the book?

I always wrote the blog, and to me the blog would always make a good book because it covered so much. I have to give credit to Novak. He was at some start-up conference, and this guy I know who leads a company called Blog Into Book, Zack Price. He went to Michigan and he reached out to Zack Novak about it, and sure enough he said he thought it could do really well, Michigan fans are great about this stuff. I always thought about it, but I didn’t go out on my own and get it, it kind of fell into my lap. If I wouldn’t have done this I would have been disappointed because it’s coming together so well.

In the second part of our interview Bartelstein talks about Trey Burke’s development, Michigan’s early season run and mid-season tumble and more.