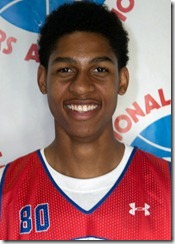 Devin Robinson’s recruiting stock has risen steadily over the last two years. The 6-foot-8 forward from Virginia was a relative unknown two summers ago before busting into the Top-100 nationally at the Reebok Breakout last July. His rise continued this spring and summer and he’s now rated as high as 24th by Rivals.com.

He’s been on the radar of some teams for a while but Michigan only began contacting Robinson after the latest July evaluation period. According to Ben Thompson, Robinson’s coach at Christchurch School, John Beilein reached out to him regarding Devin and showed significant interest throughout the later part of the summer.

“Absolutely (Michigan has been on him). I think Beilein’s followed him around at every one of his games the last few weeks (of the July evaluation period), really,” Thompson said. “I think he’s been really impressed with what he can do, skill set, getting down the court, that stuff.”

Thompson listed Notre Dame, Michigan, Louisville, Indiana, Oklahoma State and VCU as the schools who have been going after Devin the hardest recently. One aspect of Devin’s game they like is his versatility and his potential as an inside-out player.

“He’s a long, wiry forward,” Thompson said when describing Robinson’s game. “I think coaches see him as a three or a four with an ability to shoot the ball from deep and also he’s able to mix it up on the inside pretty well. Really good at bringing a lot of different skills to the table: rebounding, blocking shots. His potential is limitless and he’s got his best ball ahead of him.”

For Michigan, Robinson is yet another potential replacement for Glenn Robinson III. There’s no doubt Michigan has had their sights set on a Robinson imitator in this class for a while, as new 2014 swingman targets continue to emerge late in the summer.

Everything about Robinson’s recruitment signals that Michigan is taking it very seriously. In fact, Thompson said Beilein himself has been the coach taking the lead in contacting him about Robinson.

“To be honest, Beilein has been the one handling this contact, with me at least,” Thompson said. “I think it shows that he’s really invested in the kid. Not that I would mind talking to any of his assistants, but he’s really taken the lead role in this, and it’s been a priority for him, I guess.”

Thompson has been a longtime admirer of the way Michigan goes about its basketball recruiting, down to the refusal to offer a player until he makes it to campus.

“What’s really interesting is the way Michigan recruits in basketball: The way they handle their prospects, getting to really know them, not jumping the gun too quickly, really getting to know their prospects — what they do, what they do well, and really get to know them as people,” Thompson said. “I really appreciate that, their unique recruiting strategy. I think (Beilein) is just trying to tell Devin that he’s a real guy, there are other things that come besides basketball with the Michigan program, a good education, a family environment, excellent support, great facilities. I think he’s trying to get Devin to come visit and see what it’s all about.

“I think a prospect, they value that scholarship a little bit more, because of how much time a school is willing to invest in getting to know them, not just as a basketball prospect but as a person. And they get the right kind of kids that way, too. They’ve been able to win that way and you avoid some of that craziness that you can avoid if you recruit that way. You might miss out on a guy, but if you get the right guy you’re in good shape.”

Michigan is hoping Robinson gets the same impression — and that he finds it imperative to get to Ann Arbor for a visit. That’s the next step in his recruitment, and if the Wolverines can get Robinson in town, an offer is very likely.

Thompson said that while he wouldn’t speculate on whether or not Robinson will make it to Ann Arbor, he said that Michigan is certainly a priority for the Church View native.

“I would say the process is still open for him, but I do think Michigan is a school he’s very interested in,” Thompson said. “I couldn’t tell you right now if I think they’re going to visit, but I got a feeling that they will. I know that Devin’s into the school and what they’re all about.”

While Robinson may not be an exact replica of Glenn Robinson, the coaching staff is betting on his ability to find similar opportunities within Michigan’s offense. Thompson said he was sure that with Beilein and company’s ability to develop talent, Robinson could turn into a very good player and that he definitely has a “Glenn Robinson feel” to his game.

For now, Robinson is preparing for his senior high school season — and looking to improve his leadership skills.

Thompson said he thought Robinson preferred to make his decision by November, during the first signing period.