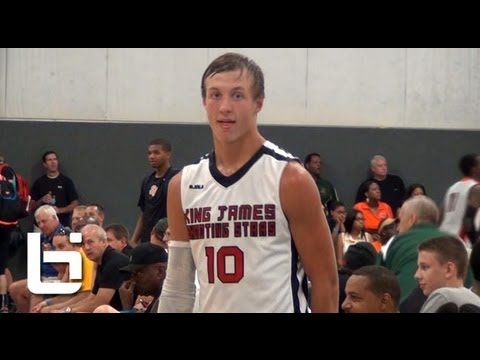 Luke Kennard made his second visit to Kentucky in the last month, stopping by Lexington last weekend. The off the cuff campus visit was a spur of the moment decision but continues to show Kentucky rising in the 2015 wing’s recruitment.

“It was kind of a spur of the moment thing,” Mark Kennard told the Herald-Leader. “We just kind of stopped in. It wasn’t anything big. Not anything too exciting — we just stopped in to say hello and that was basically it.”

Kennard’s father said they spoke with Calipari for about 20 minutes, grabbed some dinner on campus and then headed back to Franklin, Ohio. Kennard also took an unofficial visit to UK on Aug. 1. He is one of six players from the Class of 2015 with a scholarship offer from the Cats.

Kennard was raised as a Kentucky fan and the Wildcats appear to have put the full court press on the Ohio native after offering him this July.

“He has about 10-12 favorites right now,” Mark Kennard said. “We have to sit down soon and cut the list down. We will probably do that in the next two to three weeks.”

Devin Robinson has two visits scheduled, to Oklahoma State Sept. 13 and Indiana Oct. 4, according to Zags Blog. Michigan is trying to get Robinson on campus for a visit and has been recruiting him heavily since July. Robinson’s high school coach updated his recruitment earlier this week.

At this point, Michigan does not appear to be in Robinson’s top five.

But another report has Michigan in Robinson’s top six:

Scout updated its top-100 rankings after the summer earlier this week and a number of Michigan targets are ranked favorably.

The rankings should be updated, along with the latest 247 Sports consensus ranking and crystal ball projection on our player profiles.

Michigan recruiting targets Devin Booker and Stephen Zimmerman are participating in the Under Armour Elite 24 All-Star game this weekend in Brooklyn. The game will be broadcast on ESPNU at 7 p.m. on Saturday with the Dunk Contest and Skills Competition aired tonight at 7 p.m. (ESPNU).