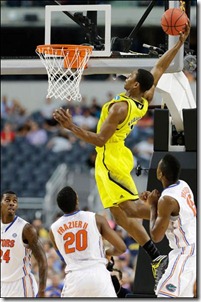 1. Young team will grow up fast or fall behind

Last year Michigan played one true road game in the non-conference season, at Bradley in mid-December. The Wolverine schedule wasn’t easy by any means but the challenging non-conference games came in the friendly confines of the Crisler Center or in pro-UM New York City. Michigan was one of the youngest teams in the country so that wasn’t necessarily a bad thing but it led to the rude awakening in Columbus in early January after the picture perfect non-conference start.

This year the Wolverines are young again but they won’t be coddled. Michigan will go on the road to face an Iowa State team that lost just one home game last season (robbed in overtime against Kansas) less than 10 days into the new season. The Cyclones lose four key cogs from last year’s team but will still be hungry to knock off the Wolverines at home. Add in four neutral games, a trip to Cameron Indoor and a home game against Arizona and it’s a safe bet that this team won’t be undefeated entering the Big Ten season this year.

Michigan’s non-conference schedule could make for some early growing pains but it also could prove helpful when this young team (again) enters the Big Ten season. If Michigan had played a few more non-conference road games last year could the Wolverines have adjusted more quickly to the rigors of the Big Ten?

Michigan could realistically play against six RPI top-50 foes in the non-conference, four of which could easily end up in the top 25 by the March. Five of those six marquee match ups will take place at road or neutral sites. That’s an impressive schedule.

As daunting as the top half of Michigan’s non-conference schedule appears, the bottom half is equally weak. UMass Lowell is in its first year of Division I basketball and South Carolina State, Coppin State, and Holy Cross all had sub-200 RPIs last year. That means it’s a likely possibility that the Wolverines will play four games against the dreaded sub-200 RPI group – several of which should be sub-300 RPI teams. Depending on how things fall, Long Beach State could be the only team in the 100-200 RPI range that the Wolverines play in the non-conference.

Conventional wisdom is that the best schedules feast on moderation – playing against a large number of teams in the 75-200 RPI range. Those games are generally more winnable than games against top teams and they pack more bang for the buck when the RPI is calculated. That’s usually for teams that aren’t playing half their non-conference schedule in other gyms. Michigan’s schedule is going to be difficult, even with the especially easy guarantee games. It just might not be the top schedule in the country due to the remarkably easy bottom half but if the Wolverines can take care of business no one is going to criticize them for who they played.

Logically, you can see the rationale for scheduling lighter opponents – most are sandwiched between big games. Do you want to come back from Puerto Rico and play a decent mid-major before you head to Durham the next week? Do you want to come home from Duke and have to prep for another challenging game before hosting Arizona? It’s still the non-conference season and without a few “off days” this team could be burned out by February. Or, worse yet, lose confidence from a few early upset losses.

Michigan has plenty of talented freshmen on its roster – Zak Irvin and Derrick Walton could be starters – but the Wolverines will face their fair share of youth as well.

Michigan will play two of the top-five freshmen in the country with match-ups against Jabari Parker (Duke) and Aaron Gordon (Arizona). Not to mention Rondae Hollins-Jefferson (Arizona), Semi Ojeleye (Duke) and Matt Jones (Duke).

Gordon and Parker especially should provide great NBA draft match-ups for Glenn Robinson III. Gordon is a combo forward with athleticism to challenge Robinson (as you can see in the video below) and Parker’s hype needs little introduction. Both prospects are two players that many hypothesized could jump McGary and Robinson in this year’s draft after they opted to return to college.

But while all the draft hype is nice, one match-up we can’t wait to see is Derrick Walton vs. Monte Morris. Morris and Walton were both offered scholarships by Michigan two summers ago before Walton acted on his first. Morris also beat out Walton by a handful of votes to take home the 2013 Mr. Basketball award in Michigan. The two have played head-to-head before (and on the same AAU team before their senior season) but it’ll be a treat to see them face off at the next level.

While the RPI-loss can probably be negated, the road games and cupcakes also mean bad news for season ticket holders. Michigan hosts UMass-Lowell, South Carolina State, Coppin State, Arizona and Holy Cross. If you are desperate to watch good basketball in person, you won’t see a lot of it in Ann Arbor until January.

The good news is that Michigan did get a marquee home game against a preseason top-10 team on the schedule. Arizona is about as good as it gets for a home-and-home series. It’s also not a weeknight Big Ten-ACC Challenge so the atmosphere should be top notch. It’s also conveniently slotted before the end of the fall semester (the weekend before finals) so students won’t be out of town.