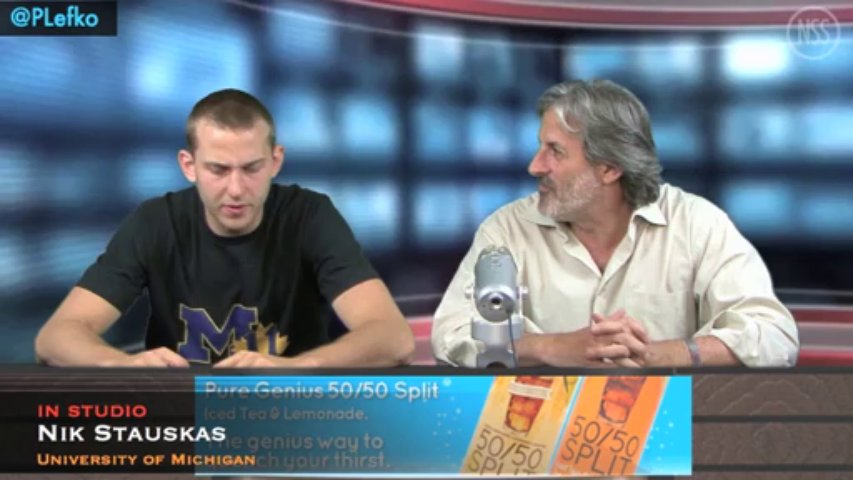 Nik Stauskas appeared on Perry Lefko’s ‘Be My Guest’ show at NextSportStar last week and hit on a wide range of topics from last season, to Steve Nash, to his improved athleticism this summer to Justin Bieber. You can watch the length interview in the embedded media player below or find some highlights and quotes after the jump.

On whether shooting was always a key to his game:

“Definitely. from day one shooting was always something I took the most pride in. my dad helped me with that an early age. Just getting out in my back yard and getting as many reps as I could. That’s what got me to that point right now.”

On the physical nature of slashing to the hoop:

“Coming into this year I don’t think I was in in the best physical shape.  I kind of had the body of a little kid, I was kind of skinny. I really took this spring and summer, I stayed in school and got in the weight room and I really worked hard with my strength coach [Jon Sanderson] to put on weight. I actually put on 11 pounds of muscle in the last couple months. Just having that extra muscle and speed and athleticism helps you around the rim when you get hit by bigger people or they are defending you.”

On dealing with tired legs throughout the season:

“Just relying on my teammates and coaches to help me through those times [when I got tired]. The veteran players on our team had been through seasons where they began to break down so just following their lead and watching how they take care of their bodies. That’s all I could do pretty much.”

On last year’s season and now what?

“It’s tough any time you go all the way to the championship game and have to follow that up next year. Just because in the tournament you never know what can happen – anyone can beat anyone. Coming into this year we’re all in agreement that we want to win a National Championship. We want to win a Big Ten Championship. We don’t want to lose games and we feel that we’re good enough to do that.

On what his role is as a veteran:

“We have five incoming freshmen this year so the one thing that the coaches have been stressing to the five sophomores is to kind of lead those freshmen and teach them the ways of how we go through our practices and games and stuff like that. Just how the older kids did for us last year. Just being there for leadership and support of the young guys, that’s what we’re there for right now.”

On Canadian basketball and the potential to play in the Olympics:

“I hope so. That’s definitely been a dream of mine to play in the Olympics and I’d be honored to represent Canada.”

On his relationship with Steve Nash:

“I’ve known Steve since I was about 15 or 16. The first time I met him I went down to Phoenix and I worked out with him for a little bit with my AAU coach who grew up with him. Now that he’s a general manager I stay in pretty good contact with him and let him know how things are going on my end and he lets me know how things are going on his end.”

“He was one of my favorite players growing up. Just seeing that he’s a little white guy, not athletic, can’t jump and he gets the job done against pretty much every point guard in the NBA. It just shows that athleticism isn’t everything and if you have the right skills and IQ for the game then anything is possible.”

On whether people recognize him in Ann Arbor:

“Sometimes people come up to me and ask for pictures and autographs but I’m not like Justin Bieber out there.”

On his thoughts on Justin Bieber:

“He’s a good guy. I haven’t met him but I want to. We need to let him know that I want to meet him. … J-Biebs I’m out here. Give me a shoutout or something.”

On why he picked Michigan:

“The main reason was I felt very comfortable with the coaching staff there. Just when they started recruiting me they really sold the way they want to play and how I’d fit into that system. I figured that would be best for me and it didn’t hurt that it’s pretty close to home for me, only like a four hour drive so my parents can come to games. Obviously it’s a great school as well so after basketball, getting an education and having that to fall back on was obviously important to me.”

On whether he’s the only guy on Michigan’s team that shoots outside in the cold:

On whether he gets grief from his teammates from being from Canada:

“It comes up all the time. A lot of guys don’t know too much about Canada.”

On who his coaches want him to emulate:

“Ray Allen. If you look at the way Ray Allen’s game has evolved over his long career. Obviously he has the most three point makes in the history of the NBA but he does a lot more than that whether it’s passing or driving, cutting to the basket. Things like that. Not only being able to shoot just staying there but being able to shoot on the move and coming off screens. My coaches really just want me to focus on moving without the ball like he does, using screens, getting to the basket. No one in the world does it better than him so it’s tough to live up to but it’s something nice to aim for.”

On whether he knows Andrew Wiggins:

“I do actually. When I was about 14 I was roommates with Wiggins, we played on the same AAU team and we went to Vegas. You could see it back then, I think he was 12 years old at the time and he was dunking and dominating at that level. We all saw it from pretty early on that he was going to be a special player.”

“That would be unbelievable. To play in my home city. I know I’d have a lot of friends and family who would want to come to every game. I wouldn’t have to get used to a new city.”

On how he stays grounded:

“The most important part is surrounding yourself with good people. Obviously I have a great family, great mom and dad and brother who really support me. And then all my friends I like to think of as good people. The guys on our team, everyone is pretty normal. We’re far from normal but when we hang out together we like to have a good time. Not make things too complicated and just live.”