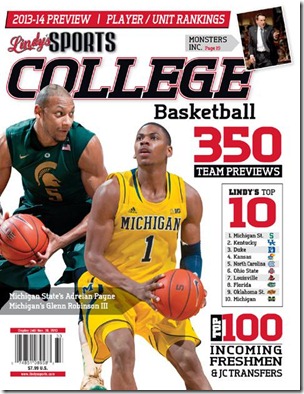 The Wolverines are also ranked in the top 10 by Sporting News at No. 7 overall. Sporting News ranks Michigan as the second best team in the Big Ten behind No. 2 Michigan State. Wolverine non-conference opponents Duke (4) and Arizona (5) also made the top ten.

Michigan is also ranked in the preseason top-ten by Lindy’s Sports, slotted in the 10th spot. The Wolverines are the third highest ranked team in the Big Ten, trailing Michigan State (No. 1) and Ohio State (No. 6). The Lindy’s college basketball preview magazine will hit newsstands on September 10th, 2013.

This marks the second year in a row that the Wolverines have been ranked in the preseason top ten. Michigan’s ranking was the subject of much debate last season but the Wolverines lived up to their billing with an undefeated non-conference season and a trip to the National Championship.

Where should Michigan be ranked this season in the preseason polls?