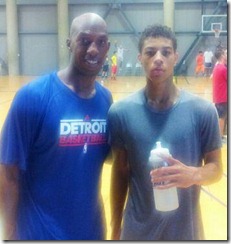 Derryck Thornton Jr. is already one of the top players in the class of 2016. The point guard recruit is currently ranked as the 33rd-best player in his class according to 247 Sports composite rankings. We watched Thornton at the Adidas Invitational in Indianapolis and he was very impressive, showing off a wide array of advanced moves and great vision.

The Henderson, NV native is already a top recruit, the particularly industrious youngster wants to keep improving. So he decided to enlist the help of some experts. Namely, a group of current NBA players training at a complex near Thornton’s home.

Thornton has been training since the close of the AAU season at Impact Basketball, alongside such players as Chauncey Billups, Mike Conley and Sebastian Telfair. While he is impressed with what they can do on the court, Thornton said he’s really learning from the work they put in.

“I look at it like, the NBA game is different than high school and college, the way they play, how hard the work every day, is what I really look at more than everything else,” Thornton said during an interview on Monday. “They just work so hard every day on their body, they eat right, they have treatment after every workout. Dahntay Jones is on me all the time just making sure my body’s good, I’m taking my forty minutes of stretching every day.

I still don’t know everything that they know, but I listen to them because they’ve already done it and I’m trying to get there.”

The players work out six days per week, with Sundays off and Saturdays reserved for just getting shots up. Monday through Friday, they arrive in the gym, warm up, perform one-on-one drills and ballhandling drills from 10am until about 11:30. Then they lift weights. After lifting, they play pick-up.

For Thornton, there are lessons abound in the pick-up games. He’s picking up tips from Billups and Telfair about playing the point guard position, as well as how to feed bigs in the post — some of the big men he’s been playing with include Jermaine O’Neal and former Bradley standout Patrick O’Bryant.

“No more chest passes; just bounce passes or put it at the rim for big guys,” Thornton said about one of the salient points he’s picked up on this summer. “When you’re playing against the NBA guys, they’re so fast, so if I throw a pass and it’s a chest pass, they might get their hand on it. But if I throw a bounce pass and keep it near the floor or if I put it at the rim, nobody will get to it. So, I’ve really added that to my game. I’ve never really played with, like, seven-footers before, like Patrick O’Bryant and all those guys. This is my first time being able to throw lobs a lot. I’m working on my floater, my midrange game, just that kind of stuff.”

While Thornton has gotten tight with all the players, he’s formed an especially close bond with one of them.

“Chauncey Billups has kind of taken me under his wing,” Thornton said. “He really talked to me a lot about different things I can work on, how to approach the game, that kind of stuff. He’s a nice guy. So, I’ve been working with him a lot.”

Thornton has had a busy summer — both on the court and off. Already being recruited by some of the top names in college basketball, the attention has only intensified since AAU season. Schools such as Kentucky, Arizona and UConn have been in steady contact, while Ohio State and Duke have both picked up their recruitment lately. He also took a recent unofficial visit to UNLV.

Michigan, Thornton said, is contacting his father and coaches “a lot.” And it seems the Michigan coaching staff has made it abundantly clear just how much they want Thornton.

“They can’t really call or contact me directly because I’m only a 10th grader, but my dad is a coach, so they talk to him about other players as well, but they’ve said that when June 15th comes around, there’s going to be a place for me at Michigan,” Thornton said.

The interest appears to be equal on both sides. Earlier this summer, Thornton predicted that Michigan would continue to be a major player throughout his recruitment. Not only that, but Thornton said he is working out the kinks of a potential visit to the Big House September 7th for the Michigan-Notre Dame football game.

Thornton has plans bring an even more lauded 2016 recruit, five-star wing Tyus Battle. Battle, a consensus top-15 recruit from New Jersey, is being recruited heavily by Indiana, Washington, Syracuse, Ohio State, Michigan, North Carolina, Connecticut and is visiting Indiana this week. Though the Michigan date is not set in stone, both families are trying to make it work and organize a trip to Ann Arbor.

“We’re trying to. There’s another guy we’re going with, Tyus Battle,” Thornton explained. “We’re going to talk to them some more [this week]. We’re going to see the Michigan-Notre Dame game and come up there.”