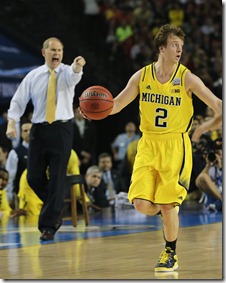 Michigan’s 2013-14 basketball schedule was finalized Wednesday with the release of the Big Ten schedule.Here are some thoughts on the Wolverine schedule. Previously: Four thoughts on Michigan’s non-conference schedule (Photo: Dustin Johnston)

That means three out of every five Michigan basketball games could be on national television with the rest on Big Ten Network.

If there was any doubt about Michigan’s basketball brand it should be gone now. The Wolverines’ game in Bloomington last season was the highest rated game on ESPN , with an average of 4,035,000 viewers. After two successful seasons, Michigan’s brand is booming.

A quick scan of the schedule shows that Michigan will be on national television at least once per week throughout the season for all but three weeks – two of which are Christmas and New Years.

Nothing on Michigan’s schedule compares to the brutal stretch in early February last season that saw the Wolverines play at Indiana, Wisconsin and Michigan State with a home game against Ohio State in the span of 10 days. That stretch was as tough as it gets in the Big Ten. Road games at the three most difficult venues in college basketball along with a marquee home game – with no time for rest. Michigan entered the stretch No. 1 in the country but finished 1-3 with a heartbreaking loss at Wisconsin and an embarrassing defeat in East Lansing.

Michigan does play three road games in nine days at almost an identical point in the season this year but the stretch doesn’t look quite as daunting. The Wolverines will travel to Indiana then host Nebraska before road games at Iowa and Ohio State. That’s a difficult stretch but the two home games immediately following it may make-or-break Michigan’s February: against Wisconsin and Michigan State.

Ohio State is a preseason top ten team according to many publications and Illinois should be at least a bubble team. Decent single plays, but landing both on the road puts Michigan against the eight ball compared to teams that might miss out on road games against top teams.

Last year Michigan State had a week of rest leading up to the Spartan-Wolverine rematch in Ann Arbor. This year, the Wolverines will be given that luxury. Michigan’s second Big Ten bye comes at the perfect time with five games to play and directly between marquee home games against Wisconsin and Michigan State.

On the whole, Michigan’s conference schedule is more balanced than a year ago. The Wolverines play consecutive road games just once, after dealing with that problem twice a year ago.

Two of Michigan’s most memorable regular season games (and losses) last season were against Indiana. The Big Ten is hoping that lightning strikes the same place twice, scheduling both rematches in almost the same spot. Michigan travels to Bloomington on February 2nd, the same date as last year’s No. 1 vs. No. 2 showdown, and hosts Indiana in the final game of the regular season once again.

Both teams lost their fair share of talent from last season – Victor Oladipo, Trey Burke, Cody Zeller, Tim Hardaway Jr., Christian Watford and Jordan Hulls – but it wouldn’t be surprising if the season’s final day had title implications once again in 2014.

The bad news about the regular season finale? It falls during Michigan’s March 1st-10th Spring Break.