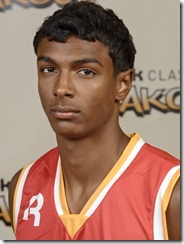 Donte Grantham is one of many new 2014 stretch four prospects who have popped up on Michigan’s radar near the end of this summer. The Martinsburg, WV native is taking a prep year at the Hargrave Military Academy, where he is sure to boost his recruiting profile.

For Grantham, it would be a second major boost in his recruitment, the first coming this summer during the thick of the evaluation period. It was late in July, specifically after an eye-opening performance at the Reebok Breakout Classic tournament in Philadelphia, that Grantham solidified himself as one of the top wing prospects in his class. Now ranked in the top-100 according to 247Sports composite rankings, Grantham is looking to take another step up this high school season.

Matt Parker, Grantham’s AAU coach for DC Assault, articulated a process early in the summer that saw Grantham feeling out his teammates and learning their style — both on and off the court.

“In the month of April and May, he was more passive than we needed him to be because he was new to the team and the team had been together for a year or two,” Parker said. “We were coming off a win at the Super Showcase down in Florida and then we got Donte when we went to Pittsburgh. So he was trying to learn his teammates. Once April and May ended, he was able to come up in June and work out with us and get to know his teammates and hang out with them, getting to know them outside of basketball.

“I think he was a top prospect in April and May. He just really showed how much of a top prospect he was in June and July. In April and May he was really good. He could take over a game, he just wouldn’t do it just because of his personality. In July, he pretty much did what the team needed him to do.”

At 6-foot-8 Grantham is a do-it-all player, with a skill profile similar to many of the other players at his position Michigan is recruiting in the 2014 class. Grantham can shoot from deep and take his man off the dribble on the perimeter, along with providing a physical presence inside with the athletic ability to be an able shot-blocker.

Grantham is a player who has a home all over the floor and, according to his coach, one who will do whatever his team needs him to do to win.

“Donte’s an outstanding player. He’s a teammate. He’s one of those guys who feeds off of everybody else,” Parker said. “He doesn’t want to take too many shots, he doesn’t want to miss anybody on the break, he likes to do everything that helps the team win. He’s a great teammate.”

While Grantham’s willingness to defer to his teammates is usually seen as a positive, he is skilled enough to the point that it can sometimes become a negative. At times, Parker said, Grantham needs to be more aggressive.

“He showed glimpses of dominating when he felt like it in the summertime, but then in some games he decided to be more passive,” Parker said. “He needed to just turn that switch on and have the same mindset every game. It has to be a total domination.”

Michigan’s interest in Grantham picked up late in the summer and coincided with his breakout June and July. Other schools, notably Texas and Cincinnati, have been on Grantham for a while, but Michigan is a player in his recruitment despite its late start.

John Beilein called Parker himself to check in on Grantham’s progress, and since then Parker has been speaking with Michigan assistant LaVall Jordan “once or twice a week.”

“The biggest person who called was coach Beilein. That was kind of cool,” Parker said. “I’ve talked to coach Jordan the most. He called me to introduce himself, and then he told me about his interest in Donte and we’ve built a pretty good relationship.”

Parker confirmed that Michigan has secured a visit from Grantham. The talented wing will be in Ann Arbor on September 7th for Michigan’s football matchup with Notre Dame under the lights.

One of the keys for Grantham, according to Parker, is the assurance that he will improve at a school, portraying an expectation that would likely be music to Beilein’s ears.

“Donte’s just looking for a place he can get better at,” Parker said. “He’s not into the one-and-done and the NBA conversation. He’s more into ‘how can I get better year-by-year, game-by-game, day-by-day.’ And whichever school can prove to him that they can get him to be his best and reach his full potential, after the four years is up, I think that will be the school that he decides to go to.”

As far as a timeframe for when Grantham would prefer to make a decision, Parker said not to be surprised if Grantham takes his time.

Grantham is also visiting Clemson this weekend but Parker said he didn’t know of any other visits scheduled for Grantham this fall.