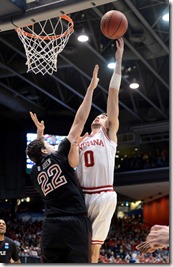 Our selection process involved much deliberation to arrive at a list that we hope will provide plenty of reaction and debate.The series will be broken into five parts (25-21, 20-16) and our third installment of players 15-10 is available below:

Crawford had improved steadily throughout his career at Northwestern and appeared to be on his way to a big season when he was forced to undergo season ending should surgery in December. When healthy, he’s proven that he’s one of the more reliable wing guards in the conference with career per game averages of 13.5 points and 4.6 rebounds. He’s a capable finisher at the basket and shot over 41 percent from long range in his last full season. While his role in new head coach Chris Collins’ remains to be seen, Crawford sounds excited to play in Collins’s new system. “I enjoyed playing the Princeton offense. It’s a really unique way of playing basketball,” Crawford told ESPN. “But Coach Collins has brought us back to the fundamentals, and it’s brought me back to playing basketball the way I did before I was in college. It’s definitely an exciting time.”

Sheehey had his most efficient season as a junior but was decidedly second fiddle to superstar teammates Victor Oladipo and Cody Zeller. He brings a little bit of everything to the table on both ends of the floor. He can knock down the three (35 percent), get to the basket (55 percent 2-point shooting), draw fouls, and he doesn’t turn it over. While he was the best sixth man in the conference last season, it remains to be seen whether he’s ready to be relied on as a focal point of the Hoosier offense. He’s always excelled playing off of the ball and spotting up on the wings but it’s easier to do that when opponents are game planning for your teammates. After participating in adidas Nations and the World University Games in Russia, Sheehey looks like a player ready to take the next step in his development as a senior.

Appling was one of our biggest misses on the list last year at No. 6 overall. He hit some big shots as a junior (most notably to help beat Kansas and Wisconsin) and made moderate statistical improvements but it never all clicked. Appling was supposed to go from good to great as a junior and it just didn’t happen. Playing the point guard position full time never quite worked out for Appling, who saw his efficiency regress in his junior season. His three-point shot is still wildly inconsistent (he went 5-of-36 from long range over a seven game stretch last season) and his assist numbers don’t rank favorably against top passing guards.

Michigan State returns more talent than any other team in the league but Appling is the player that will determine the Spartans’ fate. Can he finally master the point guard position and help Gary Harris and Adreian Payne flourish or will he be stuck in neutral for his final season?

Vonleh is the highest rated freshman on the list and the only McDonald’s All-American headed to the Big Ten this season. He just had his 18th birthday in late August and is very young for his class, a sure sign that his best days are ahead of him. His measurables are off the charts. He measured in at 6-foot-9.75 inches tall (with shoes), 242 pounds with a 7-foot-4 inch wingspan at the Nike Hoop Summit this spring. Already earning significant NBA draft buzz, Vonleh will be expected to make an early impact for an Indiana team that lost its top four scorers from a season ago. Vonleh’s size and versatility should give Tom Crean lineup flexibility and his length and rebounding ability should translate immediately to the Big Ten level.

We put Ross on the list last year and he didn’t live up to the hype. He had an improved season but still played just 15 minutes and scored six points per game in Big Ten play. But Ross had a tremendous NCAA tournament, averaging just shy of 18 points per game while helping Ohio State to the Elite Eight, and appears ready to take the next step. We might look silly once again by giving him a double-digit boost in the rankings after playing just 17 minutes per game last season but Ross should finally shine this season with Deshaun Thomas out of the picture. Ross turned the ball over a bit too much last year (23% of his possessions) but he’s a complete scorer at 6-foot-8. He shot a solid 52 percent inside the arc and 39 percent outside the arc and he will be much more comfortable being the go-to offensive player than Aaron Craft, Shannon Scott and Sam Thompson.