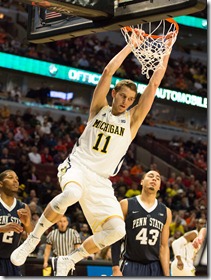 The NCAA established new practice regulations this season, moving the time when teams can officially begin practicing up to mid-September. For Michigan coach John Beilein, this means he gets an earlier look at his team than he’s used to.

And although he hasn’t seen everyone yet, Beilein said he likes what he’s seen thus far.

“Being able to do the summer workouts with them — I believe I got in six hours with them at the end of the summer,” Beilein said during a press conference on Wednesday. “It’s a different thing. We see the progress periodically more often, if that makes sense. I like the progress, I like what we’ve seen. The normal things — the body changes in the first two years are incredible, I don’t care who you are.”

As of now, the coaching staff is still only allowed brief individual workout periods with up to four players at a time. It’s not much, but it’s given Beilein and the rest of his staff some insight into what players were able to accomplish over the summer.

The guards were first, and that is the only group Beilein has seen.

“We’ve only done one session. We did some guards yesterday,” Beilein said. “Caris LeVert, Nik Stauskas and Spike Albrecht, you can see what a year of weight training has done. Derrick Walton was in that group as well, and he was exceptional with his attention to detail. His IQ was good. But we’re talking one hour.”

The change in when teams are allowed to begin practice as well as the total practice time allotted during the season means adjustments for Beilein. Here’s how it breaks down: from now until September 15th, coaches can only work out with four players at a time for up to two hours per week. From the 15th to the 27th, coaches can work out with the whole team, but still for only two hours per week. After the 27th, teams are allowed to practice for up to 20 hours per week, with a requirement that teams take an average of two days off per week.

It’s complicated, but what NCAA regulation isn’t. And for the coaches, it requires planning.

Stephen M. Ross, the New York real estate giant and namesake of Michigan’s business school, made a gigantic donation on Wednesday to both the business school and the Michigan Athletic Department.

The $200 million donation will be split between the two entities, with the 100 million dedicated to athletics set to go toward new facilities and coach salaries, among other expenses.

Beilein briefly mentioned the donation at the beginning of his press conference, saying it was one of the things that made him glad to work for Michigan.

“With the announcement today, I’m so proud to be the Michigan coach and see such a brilliant future here in all our teams, not just our men’s basketball team,” Beilein said

The offseason was one filled with key departures for Michigan basketball.

Trey Burke, the team’s best player, left for the NBA after his second year. Tim Hardaway Jr., one of the keys to Michigan’s success over the past three years, followed his backcourt mate to the League.

But the Wolverines almost had one more integral cog leave the program, and he wasn’t a player: Michigan assistant coach LaVall Jordan was strongly considered as Butler’s next head coach after Brad Stevens left the position to coach the Boston Celtics. Jordan, a former Bulldog, was thought to be the favorite until fellow alum Brandon Miller was given the job.

For Michigan fans, it was a bullet dodged — Jordan is not only a talented coach but a truly excellent recruiter, and he has been a huge part of Michigan’s success over the past three seasons.

Beilein expressed his pleasure at keeping his staff together and signaled a strong bond between not just the coaches but all the assorted support staff that make things go for Michigan basketball.

“I think that’s always been an important, significant factor in sustaining success, keeping your staff together,” Beilein said. “It’s not always going to stay together, we know things will change here and there. I know our guys love coaching here, we love coaching together. We have great meetings, we’re all on board together, as united as any staff I’ve ever been around. But to have everyone back? And I’m talking all the way to having our strength coach John Sanderson and John DoRosario and the academic counselors, it’s been pretty much free of any major changes, and as a result it’s really helped us.”

Notes: Michigan players emerged from the summer largely injury-free, though Caris LeVert battled multiple injuries throughout the summer. The guards have worked out, and the bigs are scheduled for this week.