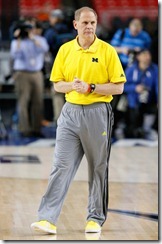 Michigan is going to earn its frequent flier miles this fall. The Wolverines are prepping to play a schedule that features multiple trips away from home before Big Ten play begins. When speaking to the media on Wednesday, John Beilein admitted that this year’s slate could provide a more difficult early season stretch.

“There’s going to be some challenges this year going on the road that we didn’t really have last year early,” Beilein explained.

Last year the Wolverines went 13-0 in non-conference play but only played one true road game, at Bradley, along with three games in New York City. This year the Wolverines will be on the road in just their third game of the season and that’s only the start of a daunting schedule. The Wolverines will have a rematch against Iowa State, who they beat at home two seasons ago. Beilein admitted it wasn’t supposed to happen like that but he’s ready to deal with it.

“The Iowa State game was a game that was supposed to be back there last year,” he said. “But they couldn’t do that so we went with it.”

The Wolverines will travel to Puerto Rico after an early trip to Ames, Iowa to participate in the Puerto Rico Tip Off. While the field in Puerto Rico might not be as strong as Michigan faced in Maui two years ago, it will still be an important challenge for Beilein’s new look roster. The Wolverines will open against Long Beach State and will face Florida State or a NCAA tournament rematch against VCU in the second round. Georgetown or Kansas State will likely be waiting for the Wolverines in the championship if they advance.

“The Puerto Rico tournament is a fantastic field as well,” Beilein said. “We have great challenges that are great opportunities for us to see what the Big Ten is going to be like.”

Trey Burke’s performance in Maui two seasons ago was the start to his rise. Watching him battle against Joe Jackson, go head-to-head against Duke (even in a losing effort), gave a sense of reassurance to Michigan fans worried about their freshman point guard. The Wolverines can only hope for a similar performance from Derrick Walton in his first November of college basketball, he’ll certainly have the opportunity.

That’s not all though, Michigan will have plenty more challenges before January. The Wolverines head to Brooklyn for the second consecutive season to face Stanford, host preseason top-ten foe Arizona and of course, travel to Cameron Indoor for the Big Ten ACC Challenge. The game at Duke could provide Michigan’s toughest test of the preseason.

“This is my third time going to Duke and every time I’ve gone to Duke — whether it was at Canisius or Michigan, we have had really young players playing,” Beilein said. “I think we had two or three freshmen starting for us at Canisius. We had Manny Harris and Kelvin Grady [as freshmen] in the backcourt when we went there [five] years ago. There’s a good chance freshmen will be on the court.”

With Zak Irvin and Derrick Walton ready to be relied upon early and often, it’s almost a blessing that Michigan will travel to Iowa State earlier in the season. Nobody wants to play their first road game at Duke and with at least one road game under their belts they will be a bit more prepared.

But beyond the game at Duke, the rigorous non-conference schedule could be a way to avoid some early shell-shock in league play. Last season the Wolverines traveled to Columbus for their first marquee road game of the league slate and were blown off the court in the first half. That experience isn’t likely to be as big of a shock the second time around. It’s also part of the reason that players come to Michigan.

“They know they’re going to play some high-level teams here, they know it,” Beilein said. “And they know they can’t take any team for granted as well. That’s the expectation, that we’re going to schedule several high-level games, whether it’s through exempted tournaments, home-and-home series, Big Ten-ACC challenge, every year.”

To his credit, Beilein backs up his talk. Michigan will have one of the youngest teams in college basketball for the second consecutive seasons but is taking on a number of challengers. The Wolverines could face six high-major or top-25 foes in the non-conference slate and will play six games away from the friendly confines of the Crisler Center.

That’s a far cry from a team like Indiana that will play four high majors and three games outside the state of Indiana on the road or Ohio State who will play three high-majors and just two games away from Columbus.