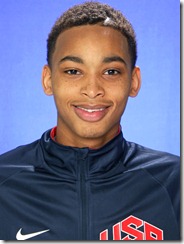 For a little while, 2015 guard prospect Eric Davis thought that Michigan had cooled on its interest in him.

The Saginaw native hadn’t received much contact from Michigan over the preceding months, and he hadn’t talked to the coaching staff much before he decided to go Michigan’s game against Notre Dame on Saturday.

One he got to Ann Arbor, however, John Beilein and the rest of the Michigan coaching staff set out to convince Davis otherwise. Davis said Michigan’s coaches wanted to clear one thing up: they still want him.

“(The visit showed me that) Michigan really wants me. I was kind of skeptical at first, but they really want me,” Davis said during an interview on Sunday. “Now I won’t really feel left out anymore. I’m not skeptical now — I’m sure they want me.”

As can be expected, the Wolverines have been a bit caught up with filling out the remainder of the 2014 class, possibly leaving some targets in other classes feeling overlooked.

Beilein assured Davis, a consensus top-25 recruit, that he was still high on Michigan’s list, and the coach said his staff would be at Davis’s open gym next weekend.

“Just before the game, Michigan hadn’t really been in contact with me. But at the game, he (John Beilein) really broke it down for me and told me what happened,” Davis said. “I really wasn’t stressing because I know a lot of schools are finishing up 2014, and that’s big, people are really trying to get some players. I wasn’t disappointed or anything, I’m just going to let them finish 2014, because I know next summer might be the same thing, going after the 2015s. We really weren’t in contact, but after the game he said they’re coming to my open gym next Sunday.”

Davis is a 6-foot-3 scoring point guard, though he may resent the placement of “scoring” in the designation of his position. Davis was assigned the tag of “combo guard” very early in his career because of his ability to score, but as his game progresses Davis has been attempting to shake the label.

He would rather be known for his abilities as a true point guard. And the Arthur Hill standout said he went a long way in showing those skills over this past summer.

“(I worked on) really getting my teammates involved and being an actual point guard. Scoring, just doing everything,” Davis said. “I didn’t over-do anything. Like, two summers ago, I was doing a lot more scoring, I wasn’t passing. Now everything is equal. I played a lot more point guard and showed off my natural point guard skills instead of trying to be a combo.”

Davis has indeed improved as a point guard, but his shooting and his scoring ability are his calling cards. And he’s been able to draw serious attention, with offers from Illinois, Iowa and Michigan State already in his pocket. Davis said Illinois, Oregon and North Carolina State have been recruiting him the hardest, along with Michigan State.

As for the apparent lack of interest from the Wolverines, Davis got that cleared up. He also got to see a terrific football game. But not before hanging out with some of the players, an old friend among them.

“I was hanging a lot with Derrick (Walton), talking to him. We have a history together — I know him personally,” Davis said. “He was telling me how he likes it, it’s a good program, you work hard. I talked to Zak Irvin, we ate, sat down and talked. Most of the players I already knew, Glenn Robinson III, Mitch (McGary). We had fun, and then after that we went over to the game, got on the field, watched warm-ups. It was a great experience, the fans were going crazy, and we sat down to watch the game. And then after the game we talked it up, they asked me how the game was, did I enjoy myself. They want me down again, just really the same stuff. They’re really looking forward to coming this Sunday, they want me. I shouldn’t think they don’t want me. John Beilein says I’m one at the top of their list. So it was really a good experience, I really enjoyed myself.

“I talked to coach Beilein. He told me that he really wants me, told me the pros about my game, told me that they really like how I run the floor, I’m very vesatile and a good scorer. And I need to work on making sure every time I play I’m making the right play every time. I can be the next Trey Burke, that’s what he wants me to be at Michigan.”

It appears the visit was a success, not only for the Michigan football team but for Davis and his interest in the Wolverines.

“It was probably one of the most fun nights ever.”