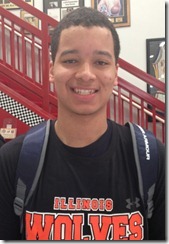 For players in the 2014 and 2015 classes, recruiting at the moment revolves around whittling down their college choices and discerning where they fit best. Visits are not only for entertainment, but also for answering the question of whether or not they could see themselves going there.

For players like Barrett Benson, a member of the class of 2016, this summer and fall is about information-gathering and relationship-building. Visits are a chance to feel out schools and coaching staffs and get an idea for what they’re all about.

That’s what Benson, a 6-foot-8 native of Darien, IL., was doing during his visit to Michigan for the Wolverines’ week one matchup against Central Michigan.

It sounds as though the versatile big man had ample time to do just that. He kicked off the visit to Ann Arbor with a tour of the facilities, which he was familiar with from attending Michigan’s College Practice Camp this past summer. Michigan assistant coach Bacari Alexander led Benson, his father and his brother on the tour.

From there, it was on to the team tailgate, where Benson was able to mingle with current Michigan players before the football game. Benson got something to eat, talked with players and coaches, and even played some games. After that, it was time for the game.

"It was just a nice social event. I had some food and played some games on the rooftop with the team and staff," Benson said. "After that, we headed over to the game, we were on the field and I took some pictures before the game during warm-ups. We went to our seats, watched the game."

Benson said he felt at ease around the Michigan players.

"All the players are really easy to talk to. They’re great guys," Benson said. "They’re really fun to hang out with. We played cornhole with a few of the guys, Mitch [McGary] and Spike [Albrecht] and Cole McConnell, all those guys. It was a really fun time."

The stop in Ann Arbor is one of a few midwest trips Benson has scheduled for this fall. Benson is planning on attending midnight madness at Marquette on October 11th, as well as Hoosier Hysteria at Indiana on October 4th.

Along with Marquette and Indiana, Benson said Purdue has been in heavy contact with him. The talented post player already holds offers from Penn State and DePaul and said both schools are on him hard. As Benson improves his versatility, something that was a focus for him this past summer, he can expect to receive more attention from around the Big Ten.

"I thought I played very consistently throughout the whole summer, which is a good thing," Benson said of his play on the AAU circuit with the Illinois Wolves. "My inside game was really going this summer and I was knocking down my jumpers, too."

If he keeps the trajectory he’s on now, Benson can expect to hear more from Michigan. For the time being, he’s content to build relationships with Michigan’s coaches and enjoy a fun Saturday in Ann Arbor. His post-visit impression of Michigan was very favorable.

"They’re a good school, they love their football," Benson said. "They have really nice facilities, a great staff and a great team. So it was a really enjoyable time."