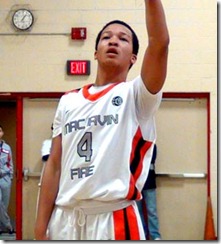 Jalen Brunson, a top-30 point guard prospect in the class of 2015, has his dad and his coaches handle most of the recruiting attention he’s been getting. Both have been fielding calls from schools like Kansas, Connecticut, Creighton and Virginia all summer.

But as far as the schools going after him the hardest most recently, Brunson listed two schools: Illinois and Michigan.

This isn’t necessarily news — Brunson said the Wolverines were one of the schools he was having the most contact with as early as June — but it does show Michigan’s steady interest in the talented lead guard. It appears the Wolverines have even had three separate coaches talking with Brunson.

“Sometimes they’ll talk to me. Like, they’ll text me, say they hope I’m having a good day,” Brunson said during an interview on Tuesday. “Coach Jordan and even coach Alexander. My dad’s been talking to coach LaVall and coach Beilein, and they’ve been wanting my to come up the past couple weeks before I made my visit this weekend. It’s really been those two, and coach Alexander I’ve been talking to as well.”

The Lincolnshire, IL. native finally made it back to Ann Arbor on Saturday, his first visit since he was offered on June 23rd. Brunson began his visit with a tour of the facilities, with his mother joining him for her first look at the Crisler Center renovations.

Brunson didn’t get much time alone with the coaches, but he said he got plenty of one-on-one time with them during his previous visit. Instead, he took this visit as an opportunity to interact with current Michigan players.

Brunson was hosted by sophomore Spike Albrecht. The two point guards talked plenty about Michigan and what it’s like to play there.

“I talked to a lot of the players. I talked to Spike a lot, just having a good conversation,” Brunson said. “I asked him what Michigan was like, and he said he loved it. He loves how the coaches treat him, they have great relationships with everyone. That was really good to hear.

After tailgating with the team before the game, Brunson entered the Big House and was able to go down to the field for warm-ups and watch the stadium fill up.

The game clearly had an impact, with Brunson ranking it among the all-time sports venues he’s experienced.

“I thought it was one of the best atmospheres ever, sports-wise,” Brunson said. “It was insane, all the support they had, it was great to see.”

For the Mac Irvin Fire standout, however, the visit functioned as a brief reprieve from the work he’s been putting in to improve his game. Brunson said he’s focused on two skills for next summer: his shooting and his defense.

“(I’m working on) just being a consistent shooter, and also my defense, just getting better defensively,” Brunson said. “Working on standing my ground, getting stronger. I’ve been spending a lot of time in the weight room with trainers. I work hard.”

Michigan’s clear interest in Brunson appears to be reciprocal. And the visit on Saturday only solidified Michigan’s prominent place in Brunson’s mind as a possible destination.

“It was exciting to see how much support they get for football,” Brunson said. “Coming in second place last year in basketball, I mean, I can’t even imagine what the support was like for that. I just learned about the support.

“I’m still very interested in Michigan. I haven’t cut down to any list so far, but Michigan — I really liked the atmosphere last weekend.”