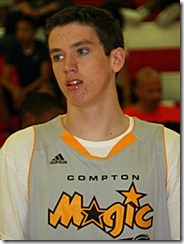 Before July, TJ Leaf couldn’t seem to get healthy. Recently, the talented forward had to play through a hurt finger, a broken wrist and a broken leg. But this summer, Leaf was finally healthy and he took full advantage of the opportunity to prove he can play.

The El Cajon, CA native blew up in July at the Adidas Invitational in Indianapolis, scoring 30 points in a loss in the title game, and that’s when his recruitment really picked up.

“I think I definitely have improved over last year. Recently I’ve always been hurt,” Leaf said during an interview on Thursday. “So this is one of the first times this summer that I’ve actually been healthy and can show people what I’m about. I’m seeing that all my hard work is starting to pay off.”

Leaf has since received interest from schools along the West coast such as UCLA, San Diego State, Portland and Arizona, as well as attention from Midwestern schools like Notre Dame, Indiana and Michigan. Indiana, UCLA and San Diego State have all extended scholarship offers. Leaf lives in California but much of his family is based in Indiana.

The 6-foot-8 swingman said he thought there was one reason for his increased visibility: he was able finally show how versatile he can be.

“I think I was just able to show my versatility,” Leaf said. “I think a lot of the coaches were able to see how versatile I was and how I can get different options being able to do my thing at multiple positions.”

It certainly got Michigan’s attention. Leaf said at this point in his recruitment, Michigan and Notre Dame have been going after him the hardest. The Wolverines had been on him for a while to get him to Ann Arbor for a visit, and they finally succeeded in bringing him to the Big House last Saturday for Michigan’s high-profile night game against the Fighting Irish.

For Leaf, the visit was about showing Michigan that he was returning their interest.

“Before the visit to Michigan, they would call me about once or twice a week just to see how I was doing, see if I could get up there, just check on me and see my interest in Michigan,” Leaf said. “I think me going up there showed them that I am the real deal about Michigan and that I would consider going there.”

Leaf arrived during the day on Saturday and was given a tour of the facilities. This being his first time in Ann Arbor, he was unfamiliar with the new renovations.

“Oh my gosh, it was unreal, the facilities and how good they were and how new they were,” Leaf said. “It was just a really great experience overall.”

After the tour, Leaf talked to John Beilein for a bit. The coach discussed Leaf’s progress and where he would fit in at Michigan. After that, Leaf went to the team tailgate outside the Crisler Center where he mingled with fellow recruits and current Michigan players.

The vibe he got from current Wolverines was positive.

From the tailgate, it was on to the game.

“I mean, it was an unbelievable game,” Leaf said. “The atmosphere, the craziness of all the fans, how the basketball team and everyone was enjoying it. It just showed me how supportive Michigan is of their sports.”

Leaf has already logged visits at San Diego State, UCLA and Indiana. But he said the visit to Michigan really left its mark.

“I mean, it’s pretty unbelievable. All the facilities and how everything is,” Leaf said. “The love and supportiveness of the coaching staff and all the players. I really rank them high on my list.”