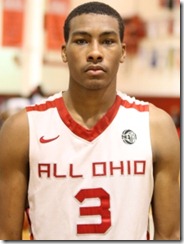 Michigan continues to widen its recruiting net in recent weeks as the Wolverines look for options in the class of 2014. Michigan has already extended additional offers to James Blackmon Jr. and Donte Grantham and has increased interest in Jonah Bolden, DJ Wilson and others.

Michigan is waiting on decisions from some of its top targets, including Kameron Chatman, Devin Booker, James Blackmon Jr. and Donte Grantham. Until they receive a commitment from one or more of those players, the coaching staff is making the rounds and letting other 2014 targets know they are still valued.

The latest player to receive Michigan interest is Javon Bess, a talented swingman from Columbus. During an interview on Thursday, Bess said Michigan assistant coach Bacari Alexander was at his open gym earlier that afternoon.

Bess said his first contact from Michigan occurred just a few days ago.

“First they talked to my coach and then they talked to my dad two days ago,” Bess said. “He just let us know that they still got a couple recruits who they’re trying to get, but they’re still interested. That’s basically what he was saying.”

While Michigan may be just now re-familiarizing itself with Bess, the 6-foot-5 guard is already very comfortable with the program. Bess has already been to games in Ann Arbor twice, one as a freshman and once as a sophomore. And two years ago, he was at Michigan’s College Practice Camp.

Needless to say, Bess is already familiar with Michigan’s program and coaches.

But his familiarity with the Wolverines goes even deeper than that — Bess is also boys with current Michigan sophomore Caris LeVert. Bess said he sees LeVert “whenever he comes back (home).”

Bess said his friendship with LeVert has allowed him to get an idea for how LeVert feels about Michigan, valuable information for a player fielding recent offers from other high-major programs.

“I went to high school with Caris. I’m cool with him,” Bess said. “I’ve worked out with Trey. So I’m really cool with a lot of people from Michigan. I talk to Caris a lot and he says he loves it there. He loves it — there’s nowhere else he’d want to be.”

Michigan has also seen its fair share of Bess as the Wolverine staff has followed his AAU teammate, Vince Edwards, for much of the past two summers.

Many other schools have joined in on Bess’s late recruitment. After July, his recruitment really picked up — the rising senior received offers from Texas Tech, Kansas State, Xavier and Richmond.

But at the moment, Bess said he is receiving the most attention from Kansas State, Dayton, who has also offered, and Iowa. In fact, Iowa joined Michigan at Bess’s open gym on Thursday. According to Bess, the Hawkeyes want to get him to Iowa City for an official visit.

“I’m just trying to soak it all in, because a lot of people don’t get to experience this,” Bess said. “So I’m just blessed to have this happen to me.”

As he parses out the programs he wants to take a closer look at, there is one feature he finds especially important: style of play.

In this regard, Michigan may have a leg up. Bess wants to play an uptempo style with lots of screens so he can “come off and make plays.” Does that sound like any school you know?

As of now, Bess doesn’t have plans in place to visit Ann Arbor, but that could change. The only visit he has scheduled so far is an official to Kansas State on October 12th. Bess has already visited Ball State, Xavier and Butler.