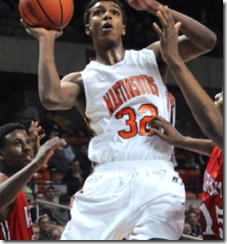 Commitments and official visits continue to heat up as the November signing period nears, here are four thoughts on Michigan’s basketball recruiting heading into the critical stretch before the early signing period. For reference, previous and upcoming fall visits are tracked here, 2014 recruits, 2015 recruits and 2016 recruits can be found on their respective recruiting boards.

For the majority of the past year, most of the top prospects on Michigan’s recruiting board have been wing guards, but the number one Michigan priority has changed in recent months.

The Wolverines are very likely to lose Glenn Robinson III and Mitch McGary to the NBA Draft and there’s no one else suited to play the four position on the roster when the class of 2014 arrives on campus. On the other hand Nik Stauskas, Zak Irvin and Caris LeVert all seem poised to be major players at the wing position for the next couple of seasons.

Michigan wasted some time chasing Kevon Looney throughout the summer but the staff also uncovered a number of other combo forward targets. Donte Grantham, Jonah Bolden and DJ Wilson are all talented players in the 6-foot-8 range that could be a great fit for what the Wolverines want to do. Add in Kameron Chatman, who is a traditional left-handed wing prospect with guard skills, who could probably play combo forward in a pinch.

Stockpiling the roster with versatile players in the 6-foot-6 to 6-foot-8 mold makes a lot of sense for John Beilein because the four spot is one of the most intriguing positions in his offense. Michigan’s tendency to play small ball but the stretch four is a basketball trend that has been seen across the board.

Kameron Chatman, Donte Grantham and Jonah Bolden could probably all fit on the same roster and play different positions within Beilein’s offense. Chatman’s skillset could expand all the way to possibly even point guard while Bolden and Grantham both can play in a three-four type of role. The bottomline is that no one in that group appears to be pigeon holed into just one position and that flexibility is invaluable as recruiting moves forward.

2. Back on the recruiting trail

Michigan has also been in Las Vegas, checking in on Findlay Prep plays Jonah Bolden, Derryck Thornton Jr. and Justin Jackson along with Stephen Zimmerman across the way at Bishop Gorman. Bacari Alexander was in watching Devin Booker on Thursday. The Wolverines also checked in Cassius Winston at U of D Jesuit along with Columbus, Ohio product Javon Bess.

One group that Michigan won’t be able to watch again anytime soon is Derryck Thornton Jr., Jonah Bolden and Justin Jackson at Findlay Prep. The NCAA ruled that any in-person evaluation of Findlay Prep, Prime Prep or Huntington Prep practices is forbidden.

Tyler Ulis committed to Kentucky on Friday evening and most expect his commitment to set off a domino effect of recruiting action. Conventional wisdom in recruiting circles for the last several months has been that Devin Booker is very interested in following Ulis to college. Both players have discussed the possibility to reporters and Booker even tweeted about it on Friday evening.

Good luck to my fam @tulis3. Play together or not he will always be my brother!

Booker, who took his first two official visits with Ulis, could be headed to Kentucky but he still plans to take his final official visits to Michigan (October 5th) and Missouri (October 19th) right now. The Wolverines were long thought to be the favorites for Booker’s services but probably have some catching up to do given recent events.

The caveat is that James Blackmon Jr. and Booker are unlikely to attend the same school. If one goes to Kentucky, the other probably won’t. Blackmon enjoyed his trip to Michigan for the football opener, where he received a scholarship offer, and is very likely to take an official visit to Ann Arbor. Should Michigan lose out on Booker, Blackmon will become a top priority. Blackmon had an in-home visit with Indiana on Thursday and hosted Roy Williams on Friday. .

4. When does Michigan take a point guard?

Michigan has taken a point guard once every two years for the last several classes. Darius Morris in 2009, Trey Burke in 2011 and Derrick Walton in 2013. That plan has worked well with one caveat. The original idea was to have two years of overlap, not send players to the NBA after two seasons. Both Morris and Burke jumped to the NBA after two seasons in Ann Arbor which means Michigan is likely to have a true freshman point guard once again.

The every-other-year point guard logic would mean that Beilein would want to grab a point guard in the class of 2015. That option is still very much a possibility but there’s also a developing chance – one bolstered by Spike Albrecht exceeding expectations – that Beilein wait an extra year to grab a lead guard.

Jalen Brunson is a can’t miss target in the class of 2015. He has a Michigan offer, has visited campus twice now – including for the Michigan-Notre Dame football game – and doesn’t have any other visits currently scheduled. Brunson said Michigan and Illinois are recruiting him the hardest right now, but the Illini landed a commitment from class of 2014 point guard Quentin Snider last Thursday.

But if the Wolverines can’t land Brunson, would they wait for a top-flight target in the class of 2016 or chase another prospect in the ‘15 class? Someone like Derryck Thornton Jr. – a top 25 prospect – could be more intriguing than Sedrick Barefield and Hyron Edwards. Both Barefield and Edwards had up-and-down summers and don’t appear to have taken the next step.

Thornton might not just be a better prospect but he could also help recruit a number of other talented prospects. Thornton plays for one of the best prep schools in the country, along with fellow U-M targets Jonah Bolden and Justin Jackson. He also attempted to bring top-20 wing Tyus Battle on a visit to Michigan although plans fell through.

That’s a decision that Michigan won’t have to rush to make, but right now it appears to be developing as a legitimate possibility.