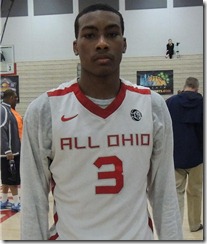 Afterward, Bess and his father got a chance to sit down with Beilein and go over some basics about Michigan. Given that Michigan is late to Bess’s recruitment, both school and player are familiarizing themselves with one another.

Later in the conversation, Beilein got down to brass tacks.

For Bess, Michigan is one of the latest in a whirlwind of Big Ten schools suddenly vying for his services. However, he said he doesn’t take anything away from the Wolverines just because of their late arrival to his recruitment — after all, most schools going after him the hardest right now got in on the action later in the game.

“He said he knows that they’re late, but there were just some guys who they were on early, and then they didn’t really get a chance to see me play,” Bess said. “I’m not going to overlook them just because they were late (to recognize me). I’m not docking anybody points if they come late.”

Bess said Wisconsin is the latest to recruit him as he first heard from the Badgers on Sunday. A Wisconsin assistant was also at open gym on Monday. He holds offers from Kansas State, Dayton, Xavier and Texas Tech. He took a visit to Dayton last weekend and is hearing from Duquesne, St. Joe’s, Iowa, Cleveland State and Toledo.

Local recruiting analyst Zach Fleer was in attendance at the open gym and tweeted that Bess played very well in front of John Beilein. He also provided this scouting report:

Becoming more confident with his three-point shot. Shoots very well off screens, uses his floater efficiently well in the lane. Can command an offense when he wants to. Has to work on dominating more and not deferring to his teammates, especially when he is the best player on the floor, which is often. Gets out and defends aggressively. Crafty around the basket. Can rebound and get back up on the offensive end before most players even land from their first jump. Attacks the lane quickly when he finds the slightest bit of daylight. Always productive, great spin move to create separation, relentless.

‘16 forward Matt Moyer another to watch

Class of 2016 forward Matt Moyer, rated the #5 small forward in Ohio’s class of 2016, is another Ohio product to watch. Moyer visited Michigan unofficiailly for the Wolverines season opener and was very impressed.

“Thing is I love Michigan. I love the campus, the people, the coaches, I really love the coaching staff, coach Beilein,” Moyer told Fleer at open gym today. “The facilities are top of the line, the best facilities. I love how they support, they came out in the live period and saw me play, they are coming into our open gyms this autumn. I like Michigan a lot.”

Zach Fleer contributed to this report.