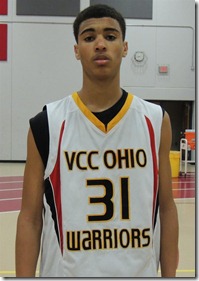 It’s still early in Seth Towns’ recruitment — the 6-foot-7 forward will be a sophomore this season — but his versatile game and sizeable potential already has schools paying attention. Towns already holds Xavier and Dayton offers while West Virginia, Ohio State and Michigan are tracking him closely.

But according to Towns, there is one school that is paying closer attention than any other at the moment.

“The school that’s been going after me the hardest is Michigan,” Towns said during a brief interview on Monday.

Towns is a native of Columbus and plays at Northland High School, the alma mater of one Trey Burke. He has a highly developed jumpshot for a player so young, and many would consider that to be his greatest asset at this early point in his career.

At Michigan’s Team Camp earlier this past summer, Towns displayed a more versatile game, rebounding well and slashing to the basket. Though his frame is still willowy, Towns said he’s working to change that.

“Right now, I’m still working on getting stronger, because I’m not quite there yet,” Towns said. “And handling the ball a lot better. Last year, I was kind of limited to shooting because I wasn’t as strong and I couldn’t handle the ball as much. Just working on versatility, getting better as a whole player.”

The talented swingman made it to Ann Arbor for Michigan’s week one matchup against Central Michigan, and it seems as though the visit made quite an impression.

Of the Michigan fans, Towns said they had to be “the best fans in the country.” He was also able to hang out with the team during the pre-game tailgate, specifically talking with Caris LeVert and Jordan Morgan. Towns said talking with Morgan was especially helpful because Morgan is graduating from the Engineering school, an area of interest academically for Towns.

Overall, it was a successful visit for the Columbus native.

“I loved it,” Towns said. “I felt comfortable as soon as I got in there. I loved the players, how they acted. They were some goofballs. I liked how they could have fun but be serious at the same time.”

Since the visits, Towns and Michigan’s coaches have been in touch. Bacari Alexander has communicated often with Towns’s parents and coaches and Towns has reciprocated the interest about once per week.

On Monday, John Beilein even dropped by the Northland open gym to watch Towns play. Towns said it was a cool experience — eventually.

“At first when I saw him walk in, I was pretty nervous,” Towns said. “Then after a while, I started getting comfortable. I didn’t play too good, but I didn’t play bad. It was pretty even. It was nice having him there, sitting there watching me. It helped my confidence a lot.”

Although Beilein spoke at length with Towns’s coach, he is still no able to speak directly to Towns because of his age.

For now, Towns appears to be high on Michigan’s list of priorities in the class of 2016, and it appears their interest is mutual.