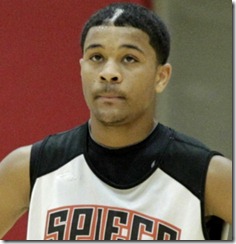 James Blackmon Jr., one of Michigan’s top priorities in the class of 2014, will be taking his official visit to Ann Arbor the weekend of September 27th.

The 6-foot-4 shooter has expressed serious mutual interest in Michigan since he visited Ann Arbor and was offered a scholarship by John Beilein and his staff on August 31st. Blackmon confirmed the visit via text message.

The 6-foot-4 shooting guard originally committed to Indiana before his freshman year of high school but opted to open up his recruitment in August. John Calipari, Bill Self, Roy Williams, Tom Crean and Michigan head coach John Beilein all visited Blackmon over the past week. All of those head coaches have offered a scholarship after Kansas offered Blackmon on Tuesday.

Michigan will be Blackmon’s first official visit, he also hopes to visit Indiana, Kentucky, and possibly Kansas officially. He took unofficial visits to Michigan, Michigan State, Louisville, Kentucky and Indiana since he decommitment.

Michigan offered Blackmon on August 31st during his unofficial visit to Ann Arbor for Michigan’s college football season opener. Since then the Wolverines coaching staff has continued to push for commitments from Blackmon, Devin Booker, Kameron Chatman and Donte Grantham while also expanding their class of 2014 recruiting net.