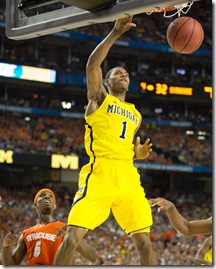 Over the next two months we’ll rundown some of the biggest storylines facing the 2013-14 Michigan Wolverines. We start with expectations. A year after a trip to the National Championship game and having two players selected in the first round of the NBA Draft, what should we expect from Michigan next season?

Michigan fans waited a long time to reach this level of success once again and the next step is to see whether the Wolverines can sustain it.

Last season was prime example of just how volatile the college basketball season can be. The Wolverines started 16-0 and eventually reached No. 1 in the country. Then things unraveled a bit down the stretch as Michigan went just 6-6 in its 12 games leading up to the NCAA Tournament. The bitter disappointment of losing a share of the Big Ten Championship on a missed last-second tip-in disappeared as the Wolverines regained their momentum in the NCAA tournament and dazzled all the way to Atlanta. (Photo: Dustin Johnston)

The lesson is that expectations change weekly in a sport where they shouldn’t be judged until the end of the year. Wins in November and December will be forgotten but with a couple lucky bounces in March, those February conference losses can also be erased.

Now what? Trey Burke and Tim Hardaway Jr. are gone but Mitch McGary and Glenn Robinson III are back. Michigan’s five man freshmen class (which exceeded expectations across the board last season) will now be relied upon to carry the Wolverines as sophomores. Jordan Morgan and Jon Horford bring back valuable experience in the frontcourt while another talented group of freshmen in Zak Irvin, Derrick Walton and Mark Donnal will be relied upon early and often.

Both Mitch McGary and Glenn Robinson III mentioned that they are returning to school to take another run at the National Championship. Given how last year ended, it would be tough for any returning player to state the end-goal as anything else. But is that a fair goal for this year’s team?

Most pundits have Michigan ranked somewhere in the preseason top-ten once again this season – a decision that doesn’t seem nearly as controversial as it was a summer ago. But after losing the National Player of the Year and another first round draft pick that feels optimistic at first glance. A longer look down the listing of other top teams reveals that it’s hard not to peg the Wolverines as contenders once again.

Michigan was the sixth youngest team in college basketball last season but won’t be much older – if at all – this season. Five sophomores and at least two freshmen should be in the Wolverine rotation and Michigan could easily field a starting lineup of freshmen and sophomores. Youth didn’t hold the Wolverines back last season but will certainly have to be watched early in the season, especially without Trey Burke helping everyone along.

Should Michigan be a top-ten team? Top-25 team? Do the Wolverines have the talent to compete for a Big Ten Championship or take a trip back to Cowboys Stadium for the Final Four this spring? Share your thoughts in the comments below.