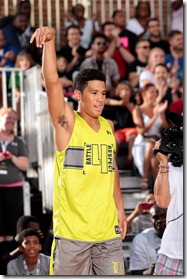 John Beilein and Bacari Alexander were both in attendance for Devin Booker’s open gym on Wednesday evening but they weren’t the only ones. John Calipari and a “full house” of coaches from Kentucky were also in attendance.

Booker is considered a Kentucky lean by most but still plans to take his Michigan and Missouri visits in October. Recent Wildcat pledge Tyler Ulis is continuing to pressure Booker to join him in Lexington.

“We actually talk about it a lot,” Ulis said. “He’s still going to take some visits though, because he wants to see what he wants to do. He’s not really sure yet. But we’ve actually talked a lot. We talk almost every day now.

Michigan will have its shot to win Booker back with an official visit in two weeks but the Wolverines defintiely appear to be playing catch up at this point in time after once being the out-and-out leaders for Booker’s services..

John Beilein was in to watch Luke Kennard earlier this week. While Kennard has been written off my many as a Kentucky lean, Michigan and other schools continue to put their best effort forward.

Other schools that have offered Kennard a scholarship include UK, Michigan State, Indiana and Louisville.

Coaches were allowed to begin off-campus visits with recruits on Sept 9. Kennard was in Rupp Arena that night to see the UK Alumni Charity Game — his third visit to Lexington since receiving a scholarship offer in July.

There’s been talk of a return trip to Ann Arbor for Kennard but no dates have been thrown around at this point.

James Blackmon Jr. will visit Michigan next weekend, his first official visit. He updated his recruitment with the Indy Star and noted that he probably won’t take all of his visits.

“I probably won’t take all five official visits because I’ll probably decide before that happens,” he said. “I’m looking for a coach that I can really trust and a team that has a chance to compete for a national championship and has good players to play around. A coach who will help me get to the next level.”

Michigan gets the first visit to Kentucky, Indiana and possibly Kansas are all in play for official trips as well. It would be a shock if Blackmon makes a decision before at least visiting Indiana and Kentucky but the Wolverines will have their opportunity to take their best shot with their second visit in a month’s time.

Rivals unveiled its Class of 2016 Top 35 on Wednesday and a number of Wolverine targets are in the mix.

Our class of 2016 recruiting board and recruiting profiles have both been updated with the latest Rivals rankings and 247 Consensus Rankings.