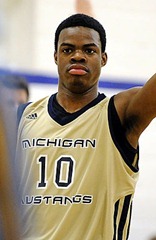 Derrick Walton was tabbed as the No. 9 incoming freshman by Sports Illustrated.

It is impossible to replace someone like Burke. The good news for Walton is that he doesn’t have to be Burke. Not even close. The two aforementioned NBA draft abstentions (center Mitch McGary and forward Glenn Robinson III) will make the freshman point guard’s transition into college much less stressful. Walton is likely to replace Burke in the starting lineup (sophomore Spike Albrecht could also see significant minutes), but thanks to the respective returns of McGary, Robinson and sophomore Nik Stauskas, among others, there will be no great need for him to match, or even come close, to Burke’s production. Michigan is considered one of the clear favorites in the Big Ten this season, but much of that opinion is rooted not in Walton himself, but the players returning around him. Walton’s impact may not be as statistically pronounced as some of the other players on this list, but he will be asked to log major minutes on a team very much in contention for a conference championship. As “impacts” go, that feels pretty big.

Daniels: “I like Derrick’s toughness and his speed. He’s certainly going to have a lot of opportunities from the get-go. He’s a guy that’s won a lot of games at the high school level and I think he fits into what Michigan wants to do pretty well.”