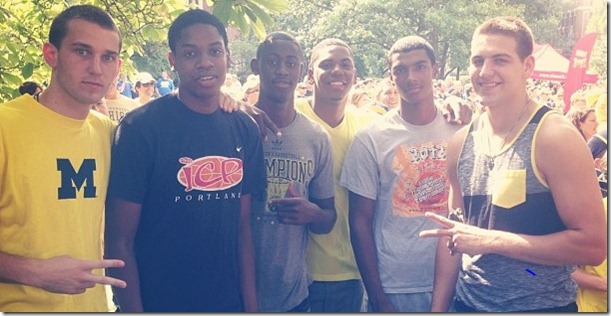 With the early signing period less than two months away and a handful of official visits already in the book, we took the time to recap Michigan’s class of 2014 recruiting board. Here’s a look at the primary targets on Michigan’s recruiting board, their decision time frame, recent video, past and future visits and where they might be leaning.

Skinny: Grantham is nearing a decision after taking three official visits – to Clemson, Michigan and Cincinnati – and almost all signs point toward Grantham pledging to Michigan. He was back home in West Virginia over the weekend with his family and a decision is expected shortly.  Grantham, a top-100 prospect, would be a solid start to the class for the Wolverines and provide momentum headed into the final two months of the early recruiting period.

Skinny: Chatman is nearing the end of his fall visit tour and the presumed next step is a decision before the early signing period. His Michigan visit for the Notre Dame game went swimmingly per all accounts but the West coast native has plenty of connections to his other suitors. Oregon is the local school, his high school teammate Roschon Prince hosted him at USC, and his father has a strong relationship with Arizona assistant coach Damon Stoudemire. Chatman’s interest in Michigan is sincere, he wouldn’t have traveled across the country twice this summer if it wasn’t, but the Wolverines have plenty of competition.

Skinny: Booker is the only prospect remaining on Michigan’s recruiting board that the Wolverines offered last summer. Michigan has been recruiting Booker as long as anyone but the Kentucky Wildcats are widely presumed to be in the driver’s seat headed toward the home stretch. Michigan and Missouri, the two schools with the emotional pulls (Missouri where his father played and Michigan where his mother lives), will have their final opportunity to impress Booker before he makes his decision.

Skinny: Blackmon is another player who is expected to choose Kentucky by most recruiting analysts. But he’s also another prospect that Michigan will get a chance to pitch with an official visit.  One of the more intriguing elements of Blackmon’s visit is that it takes place during the football team’s bye week. Blackmon has visited Michigan for a football game (Central Michigan) and a basketball game (Indiana) so the Wolverines can focus on other areas but given Michigan’s football environment that’s usually the focus of any official visit.

Skinny: Wilson took his first official visit over the weekend to Columbia and will travel to Gonzaga before heading to Ann Arbor. Michigan looks to be in a great position in his recruitment and his game seems like one that would complement Donte Grantham’s effectively. Wilson is a tall, lanky offensive player with a smooth jump shot while Grantham is an athletic and aggressive slasher and rebounder.

Skinny: Bolden hasn’t been shy in sharing his early affinity for the Wolverines and his father has already stopped by campus. However, one has to wonder if the timing of his recruitment will jive with Michigan’s plans. Bolden hasn’t taken the ACT or SAT yet, meaning he can’t take official visits, and seems set on making his college decision before the late signing period. Michigan likely won’t be able to pass on so many other targets on their board to wait for Bolden in the spring. Bolden’s list currently sits at 10 schools with Michigan and Louisville two of the schools in strongest pursuit.

Skinny: Bess has emerged as a late target for a host of Big Ten schools, not just the Wolverines. The jack-of-all-trades wing guard has heard from Iowa, Wisconsin, Michigan and Michigan State of late. Bacari Alexander and John Beilein have both watched him work out and a visit could be in the works in the coming weeks. Bess only has one official visit scheduled right now, but has been sure to reiterate that late interest from Big Ten schools won’t be discounted. Should Bess visit Michigan and receive a scholarship offer, it would be surprising if he ended up anywhere other than Ann Arbor.

Ryan Luther (6-foot-8, Combo Forward)
Official Visits: Duquesne, Dayton
Remaining Visits: Kansas State (10/11)
Time Frame: Early Signing Period
Skinny: Luther is a late emerging back-up option at the stretch four position. John Beilein and Bacari Alexander have both been in to watch him play and he recently added an offer from the local high-major, Pittsburgh.  Luther appears to still be a back-up option for now but he’s a prospect that could visit Michigan in the next month depending on how things fall.