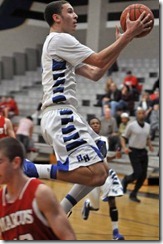 When we last checked in with Tyler Williams, his Urban DFW coach, Corey Dudley, said the swingman was “high on Michigan” and that he was looking forward to visiting in the fall.

Now, fall is here and Williams’ second visit to Michigan — his first was for last season’s football game against Michigan State — is rapidly approaching. The 6-foot-4 Williams will be in Ann Arbor on Friday, November 1st, the day before the Wolverines take on the Spartans in East Lansing.

Also: his feelings about Michigan haven’t changed since this summer.

Since AAU season, Williams has been working to improve his foot speed and his jumpshot. Already an excellent rebounder for a guard and a tenacious slasher, Williams reported that his game’s development is coming along nicely in preparation for his high school basketball season with Hebron High School in Texas.

His improvement over the summer caused plenty of schools to take notice. He picked up two offers near the end of the AAU season, from Creighton and San Jose State, but has received interest from the likes of Texas, Michigan, Michigan State, Virginia Tech, Texas Tech and Florida State.

During the summer, Williams told us he was talking with Michigan assistant coach Bacari Alexander on an “every-other-day basis.” But with Michigan’s current focus on shoring up its 2014 class, Williams said contact has dropped off a bit since then.

“I know they’re working on their 2014 class right now, so as of now our contact has been a little bit limited since the summer,” Williams said. “But I look forward to coming back out there and getting a chance to be around the coaching staff and the players again.”

The contact he does get from coaches doesn’t always revolve around basketball.

“Of course, we’re going to talk about (basketball), but they just ask me how my family’s doing,” Williams said. “They ask about my mom and her pregnancy. It’s just that they’re genuinely nice. It’s just a good feeling having those guys around you.”

Williams said he’s looking forward to seeing the coaches once again in November during his visit. He’s also looking forward to knocking out two visits with one trip: the Carrolton, TX native will be spending Friday on Michigan’s campus before heading over to Michigan State for a visit and the football game.

For the talented swingman, the visit will be nice because he’s excited to see Ann Arbor again — but he’s also pretty pumped about getting out of the Texas heat.

“I just like the environment, really,” Williams said. “I grew up for a little bit for a while in Wisconsin, so it’s not too far from where I was raised. The weather and all that stuff is just kind of relaxing, getting away from all that heat.”

At this point, the only other visit Williams has scheduled is to Texas A&M on October 18th.