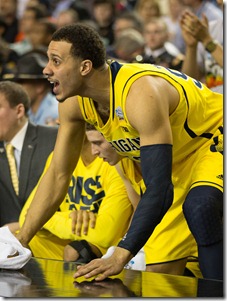 During the course of Jordan Morgan’s career at Michigan, the stalwart big man has seen plenty of teammates come and go — some graduated, some transferred and a surprising amount left early to pursue careers in the NBA.

Now, the fifth-year senior and elder Wolverine is tasked with leading the latest in a line of Michigan teams that seem to get younger every year. This season, the Wolverines’ two premiere players will be Glenn Robinson III and Mitch McGary, both sophomores; they will be breaking in either a freshman or a sophomore — Derrick Walton or Spike Albrecht — to start at point guard; they will also rely heavily on talented freshman Zak Irvin for perimeter defense and versatility.

How does Morgan feel, looking out at the Player Development Center floor and seeing a gaggle of first-and-second-year players? Morgan summed it up nicely during Michigan’s press conference on Friday preceding its first practice of the season:

“We’ve got a lot of young guys,” Morgan continued. “I think I’ve been trying to focus on my teammates, just trying to grow as a leader. I know that for us to be successful, we’re going to need strong leadership throughout our whole team. So we’ve put a focus on that as a program, as we always have, but we’ve seen a lot of people outside of just myself step up and step into leadership roles in our workouts and off the court as well.”

Morgan is used to leadership role: last season, it was largely Morgan, Trey Burke and Tim Hardaway Jr. who carried the mantle after the departure of Zack Novak and Stu Douglass. Now, with Burke and Hardaway both leaving early for the NBA, Morgan remains as a seasoned leader with a young team looking to him.

But Morgan doesn’t want his teammates to just follow him — he wants to teach them how to be leaders themselves, regardless of age. He said it’s the crucial sophomore class — those players who received a crash course in the heights of college basketball as freshmen last season with Michigan’s trip to the Final Four — who need to learn their leadership roles.

“That’s something that we place a lot of value on in our program — teaching leadership,” Morgan said. “We’ve done that for the past two summers. We’ve taken a lot of steps toward teaching that leadership, especially to our sophomore class, trying to introduce the freshmen to our culture. Once they got a strong hold on that culture, they’ll start to learn more about leadership and they’ll see new freshmen come in and they’ll have to be leaders themselves next year.”

The surprising turnover Michigan has experienced recently, with its best players leaving early for the NBA, has meant that younger and younger players are being asked to step into leadership roles. Michigan is lucky to have someone like Morgan, an elder statesman who’s seen it all and can provide some wisdom for a team long on talent but short on experience.

Morgan pointed to two recent experiences that helped him grow as a player and as a person: one was overcoming a devastating ankle injury last season, and the other was a trip he took to the Ivory Coast in August as part of the Athletes in Action program.

The ankle injury gave Morgan some time to think and renewed his enthusiasm for basketball.

“I think that I gained a lot of perspective from that injury, just about what’s important,” Morgan said. “You put so much emphasis on basketball, but there are a lot of much more important things in life than just basketball. I have a new appreciation for just being able to play. I don’t have any nagging effects from that injury anymore, so I’m just trying to enjoy every moment that I have left in this program.”

His overseas trip also had a profound effect.

“My trip to Ivory Coast was a great experience, and I was just able to grow and just gain some strength coming back to this program, being able to step into the leadership role that I have to.”

Off the court, Morgan provides an exceptional example of how a Michigan basketball player ought to conduct himself — an example that younger players can always look to for guidance. But on the court, his leadership is equally valuable: Morgan has the most thorough understanding out of any players on the team of John Beilein’s defensive principles. He has the ability to direct nearly every player on the court from his perspective under the basket.

And this season, Morgan will be leading a Michigan frontcourt who may have to prepare for the possibility of life without its most talented player, Mitch McGary. The Wolverines hope McGary will make a full recovery by the time the season starts, but the possibility remains that other post players may have to step up. In that regard, Morgan isn’t worried.

“We’ve seen a lot of growth this past year in our frontcourt. Obviously in Mitch, but I think Jon has grown a lot,” Morgan said. “I would say I’ve grown a lot too, my game has progressed. And I think Max has grown a lot. I think we’ll be able to focus every day on getting better, and let that situation take care of itself, kind of how we always do. You always got to have someone ready to step up, and I think over the years we’ve always had that. Last year, I wasn’t 100 percent, but we had guys like Jon and Mitch step up and play amazing. It’s always been that kind of attitude in this program and it’ll keep being like that.”

Morgan has seen talented players go through injuries before, and he has witnessed his teammates step up time and again. It’s that experience that allows him to approach the current situation with a calm his teammates can look to and emulate — and it’s what makes him an ideal leader for this season’s Michigan basketball team.