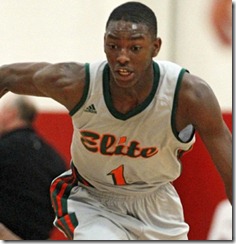 Jalen Coleman is one of the top prospects on Michigan’s class of 2015 recruiting board and the 6-foot-3 guard has picked up where he left off after a solid summer. Coleman impressed at the NY2LA Futures Camp earlier this month and put together antoehr big weekend at the John Lucas Midwest Invitational.

Rivals.com noted Coleman as one of the top performers at the event:

Both Toye and Coleman were already among the most high profile names in the Midwest heading into John Lucas camp. However, by the end of the day both had also increased their stock in the eyes of most scouts.

The 6-foot-3 Coleman has proven that he is one of the quicker and more dominating athletes in his class among combo guards, while also developing better touch on his outside shot. With the ability to play either guard spot offensively, and the mindset of a lockdown defender on the other end, the No. 36 prospect in the 2015 Rivals150, is looking more and more like a priority for the Big Ten schools that surround the La Lumiere campus.

Coleman’s Michigan visit earlier in September went well but he’s in no hurry to come to a college decision. With a list that still includes Indiana, Purdue, Butler,Michigan, Michigan State, Illinois, Notre Dame and is still growing, Coleman has options. He’s also visited Notre Dame this fall and is also eyeing a trip to Bloomington for Hoosier Hysteria.

Coleman earned praise from a number of observers on Twitter as well.

Once again Jalen Coleman showing me why I think his highly underrated. He's showing he can do it all on both ends. Complete game #JLMidwest

First day of Lucas camp is over. Thon Maker, Jalen Coleman, Deng Adell & Carlton Bragg were a few of the standouts.

ESPN updated its class of 2014 and 2015 rankings last week and Michigan targets litter both lists.

The 247Sports Consensus ranking should be updated on all of our recruiting profiles.

Carlton Bragg impressed at camp and also visited Kentucky and Louisville unofficially while he was in the Blue Grass State for the event. Bragg was one of the top prospects at the event and put on his typical display of shot blocking and dunking.

The top junior in the event was unquestionably Carlton Bragg, who continues to skyrocket up the recruiting charts. Presently ranked at #10 by ESPN, he lived up to his lofty ranking with his energetic play on Saturday. He dunked everything in the paint, was a monster on the offensive glass, and drilled a number of deep three pointers. The face-up four is fresh off of a visit to Louisville and will be heading to Lexington on Sunday to see what Coach Calipari has to offer.

Carlton Bragg – ’15 PF Cleveland VASJ: We went into the event focused on other guys we haven’t seen as much before, and as he’s done in the past, Bragg just played so well that it would be disgraceful to leave him out of our recap. The top-ten nationally ranked junior toyed with opponents on the offensive end, using his size, perimeter shooting and handle to get whatever shot he wanted from different spots on the floor. As he has for the past few months, Bragg continues to separate himself from the competition by not only having more talent, but by playing with more energy and passion. That effort not only makes him an entertaining talent to watch on the court, but someone that you can’t help but root for.

Michigan has been in to see Bragg workout this fall and is working to get him on campus for a visit.

Fresh off an unofficial visit to Ohio State this past weekend, the sophomore Towns was solid once again on Monday. Officially measured at 6’8 during his visit to Virginia Tech several weeks ago, Towns is becoming a more complete offensive player each time I have seen him. The small forward excels with his step-back jumpshot, and has worked hard to improve his ball-handling and facilitation of the offense from the top of the key. When left open, Towns will knock down shots from the perimeter. Guarding 6’7 power forward Jaylen Tucker, Towns’ low-post defense looked to be also improved, another testament to how hard the sophomore phenom works.