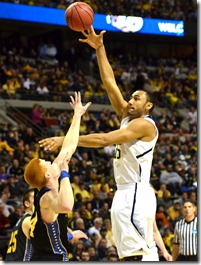 It’s no secret that Michigan redshirt junior Jon Horford has been battling injuries throughout his career as a Wolverine.

Last season Horford dislocated his knee cap twice, in the preseason and again in December. As a sophomore, he suffered a stress fracture in his foot and Michigan coaches decided to shut him down for that whole season. The setbacks have been frustrating for the Lansing native, but there is good news entering this coming season.

“Physical health is good right now,” Horford said during Michigan’s press conference on Friday. “I feel as good as I’ve felt since I’ve been in college, and I’m really happy about that.”

Horford’s health is encouraging for a Michigan front line that will have to deal with preseason All-American Mitch McGary being day-to-day with a nagging lower back condition. If McGary’s injury persists or hampers him unduly during the beginning of the season, Horford and other frontcourt players will be called upon to pick up the slack.

Horford has given fans tantalizing flashes of real talent and athleticism throughout his career at Michigan, but with all of his injuries, that’s all they were. Now healthy, the big man has a chance to consistently contribute and show what he can do now at this later point in his time as a Wolverine.

The fact that he’s injury-free, combined with the overall vibe of this season’s team in the early going, has Horford in a good mood.

“I feel good. When everything’s gelling with the team, it’s hard not to feel good,” Horford said. “Guys are putting in a lot of effort. They’re making my job and Jordan’s job a lot easier, as older leaders. So I really couldn’t ask for more.”

Those players making his job easier would be the incoming freshmen, who by all accounts have been receptive, diligent and aggressive. Horford said that while he isn’t surprised at the freshmen, they are nonetheless impressive.

The Michigan coaches have had ample opportunity to instill the Beilein fundamentals in the young players, thanks to new NCAA rules governing offseason practice time that gives teams 30 practices over six weeks as opposed to 24 over four weeks.

According to Horford, the extra time has helped not just the freshmen but the rest of the team, as well. Because of the extra time earlier in the fall, by the time October comes around, the coaching staff is able to move away from the basics and dig into offensive and defensive principles.

“It’s always beneficial to the team when you can have more time together, especially when you can have more time with the guidance of the coaches, with a coaching staff that’s as structured as ours is, who will tell us what they expect of us early,” Horford said. “And we’re able to work on that and do our best going into the fall. That time together makes all the difference.”

That could be critical with Michigan’s rigorous start to the campaign. The Wolverines will travel to Iowa State, Puerto Rico and Durham in the first month or so of play.

However, there’s only so much the coaching staff can do. When asked about how Michigan was planning on replacing their invaluable scout team from last season — a group of five seniors who, while they didn’t often see the court, were instrumental in their leadership and preparing Michigan for its opponents — Horford was realistic.

Horford urged caution, but contended that the guys coming in would be able to fit in.

“That experience, that’s something that only time can replace,” Horford said. “As much as we want our freshmen walk-ons and the scout team to be ready to fill that role, it’s going to be next to impossible to do that. They had all been here four or five years, they all knew the system, they were all great players. But these kids, they can play. They’re all really good. I feel like they’ll impress a lot of people.”