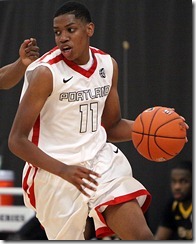 For a while, it looked bleak: Michigan had swung and missed on a number of its top 2014 prospects and the Wolverines couldn’t seem to land a commitment.

Now, Michigan fans can exhale. The Wolverines got exactly what they were looking for in 2014 with the commitment of four-star recruit Kameron Chatman, a 6-foot-7 wing out of Portland, Oregon.

Chatman possesses all the skills necessary to fill almost any position on the Michigan roster including the mismatch-causing role Glenn Robinson III is likely to vacate after this coming season, when it’s likely Robinson will leave for the NBA. The left handed swingman can handle the ball, shoot and distribute, and rebound the ball. In a word, he’s versatile – an attribute prized by Michigan’s coaching staff.

Kameron’s father, Canaan Chatman, talked on Tuesday night about where he sees his son fitting in with Michigan’s system.

“Kameron is a perimeter player who just happens to be extremely tall and has the gift of rebounding. He was taught at an early age, how he views the game, handling it, passing it, shooting it and everything, if you’re going to have that length and that size, you’ve got to rebound,” Mr. Chatman said. “There’s no way he was going to get a chance to push the ball unless he was in the paint mixing it up. So moving forward, he was being recruited as a two/three with the ability to play some one. Coach Beilein sees him playing one, just because he does have the ability to facilitate; he’s a great passer, he handles the ball extremely well. He’s six-seven and a half right now. By the time he gets to school, I know he’ll be a little over six-eight, might be closer to six-nine. So he might move a little bit off the ball, but his skills will be in place.”

How did Michigan close the deal? John Beilein and all of the assistant coaches took an in-home visit to the Chatman home and made one last pitch on Tuesday.

It was an opportunity for Chatman to ask some last-minute questions — and for the coaches to refresh his memories of his visit for this year’s Notre Dame football game, an event that clearly had an impact on how he perceived Michigan.

“The game was something I’d never seen before. 115,000,” Chatman said during a brief interview on Tuesday. “That was only my third football game ever, so 115,000 was something else. That was a good experience. And I liked the team. They were some good guys. I really bonded with the team well.”

Michigan’s coaching staff had their final say, and although initial reports read that Chatman would be making his decision Wednesday, he saw no reason to delay.

“He wanted the coaches to come in and get a chance to sit down,” Mr. Chatman said. “Obviously Arizona came in last week, so we invited (the Michigan coaches) to come sit down on our turf and just kind of put coach on the hot seat: ask a couple of questions, get their vision for what they saw in Kameron and really just, from our family’s standpoint, what they were thinking. So we sat and talked for a couple hours and when it was all said and done, Kameron decided this was where he wanted to go and he wanted to go ahead and get things going so he can start working on some other guys in his class as well.”

For Chatman, one of the most important factors during Michigan’s recruitment of him was the fact that the Wolverines had been on him way back in 2012, long before he became one of the top players in 2014.

“They were actually the first school that started recruiting me out of all the schools that I had,” Chatman said. “Just them sticking it out and respecting everything, the process I was going through, that kind of was (a factor), just because I felt that I got to know them a little bit more on unofficials and stuff like that and I was able to get to know the players more and the coaches more. I think that played a factor.”

The journey is not over for the class of 2014, though Chatman’s commitment is a very significant step. Michigan is still in the fight for other top recruits, including top-50 player Jonah Bolden. Donte Grantham is also very much in the mix and is scheduled to decide between Michigan and Clemson on Friday. James Blackmon Jr. visited Michigan officially last weekend and Devin Booker and DJ Wilson will visit this weekend.

Luckily, Chatman and Grantham did some bonding at the Notre Dame game — and Chatman is already putting on his recruiting hat.

“I’m gonna turn it over now and get on my recruit tip,” Chatman said. “I’m a good advertiser, so I’m gonna try this out and see how it goes. I was talking to (Grantham) this weekend, so I was gonna try to get at him.”

Along with getting Grantham on the line, Chatman also received congratulatory texts from Caris LeVert, Nik Satuskas, Mitch McGary, Jordan Morgan and others from Michigan’s basketball program.

After a late scare from prognosticators predicting Chatman would land at Arizona — a prediction both Chatman and his father were perplexed by, given that neither of them talked to media during the time Chatman was taking his visits — Chatman is a Wolverine. And while it’s an exciting time, it also brings relief to a young man who’s been imbedded in the high-profile recruiting world for almost two years.

“At the end of the day, for him to get to this point, it’s not just, ‘I’m tired of going through the process, let’s hurry up and make this decision’; it’s, ‘I’m tired, so really let me slow down and focus on the things that are important,’” Mr. Chatman said. “Kameron is not a secret at all. With that has been a lot of pressures both personally and corporately with shoe affiliations and all that stuff, but through that he felt comfortable in his decision and where he was going. And for him to make a decision to go 2,400 miles away from home, there had to be some things that were in place that would make us comfortable with it.”

Chatman himself felt relief from the process being over, but he is also clearly confident in his decision.

“It was a long recruiting process,” Chatman said. “Everybody was kind of weighing in on me. And after I took my officials and talking about it, I was ready to get this over with.

“Michigan is just the place for me.”