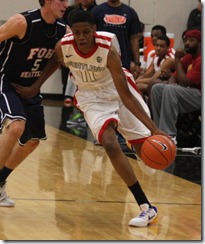 In four-star wing Kameron Chatman, Michigan finally has one of its crucial pieces for the class of 2014 and a possible replacement for Glenn Robinson III. But late in the game, it didn’t seem as though Chatman was leaning toward Michigan — at least not to the 247 crystal ball collective, almost all of whom picked Chatman to stay on the west coast and go to either Arizona or Oregon.

For those who followed Chatman’s recruitment since Michigan first began talking to the Portland native, it was obvious Chatman was high on the Wolverines. But those late predictions cast doubt on his possible destination.

According to Chatman’s father and AAU coach Canaan Chatman, those predictions were truly vexing, considering neither he nor his son had talked to media during the time they were taking visits. Their silence, he said, was calculated specifically to avoid erroneous predictions.

"We approached Arizona media just like we approached you guys. We didn’t talk to anybody," Mr. Chatman said. "So we got the information when everyone started forwarding us that it looks like Arizona, that Kameron’s going to commit. Kameron and I looked at each other, like, ‘I didn’t talk to anybody, did you talk to anybody?’ Our approach the entire time, we didn’t comment taking visits nor did we comment after visits because we didn’t want people predicting. We just wanted to make sure we kept it honest, steered clear and didn’t lean either way."

Despite the family’s best efforts, speculation abounded as Kameron moved up the recruiting rankings throughout his junior year and this past summer on the AAU circuit. Mr. Chatman attributes this to Kameron and his family being determined to let the process play out and make a measured decision after all available information was gathered.

Hence all the visits, reports of which could have led to speculation. In spite of the fact that Kameron committed a day earlier than was initially reported, his decision was anything but hasty.

"It’s been a long process, shoot. Kam is 17, we been working for this for about 15 years now," Mr. Chatman said. "Going through it, being in it, I didn’t know he was going to come to his decision that quick, but nothing about it was knee-jerk. I think this was well thought-out. The process, we felt, was a pretty extensive process that gave him the right information as well as me and my wife. We felt good about coach Beilein and his staff."

That was clear: one of the major reasons, if not the major reason, for Kameron’s commitment was the relationship developed with John Beilein and his staff over a long time.

According to Kameron, Michigan was the first school that started recruiting him back in 2012. Mr. Chatman made it clear that Michigan being around since the beginning was an overriding factor in Kameron’s decision.

"The thing we liked about Michigan was, first and foremost, Michigan has been recruiting us the longest," Mr. Chatman said. "Coach (Beilein) has been in with us. Coach Meyer started his recruitment in July of 2012, and he’s been there since day one. From him going up to Long Beach Poly, checking out open gyms, staying in contact when Kameron couldn’t play — our relationship even started prior to that, and then to stick through it and even turn it up. In the spring and summer, Michigan’s interest was apparent all the way through."

But while it was the steady work Michigan put in on Kameron’s recruitment that laid the foundation for his decision to commit, it was something late in the game that closed the deal, according to Mr. Chatman.

Kameron’s visit to the Notre Dame football game under the lights at the Big House resonated with the talented wing. From that day forward, Michigan was in the driver’s seat — despite what the prognosticators were saying.

"I think it was strategic, us going to the Notre Dame game. I think that was an opportune time to really get a good feel of the Michigan experience seeing Michigan and its campus live this time, getting to spend time with the kids — which was probably what sealed the deal," Mr. Chatman said. "Just his camaraderie and his fellowship with them. From there, I don’t want to say Michigan was the school to beat because Arizona was right in there, but at the end of the day, just what coach Beilein embodies: being blue collar, there’s no magic wand. It’s just roll your sleeves up and let’s get to work."

In the end, Kameron considered Michigan to be a place where he would showcase his talent in the best conference in basketball, play with guys he made easy friendships with, and be developed into an NBA player by an elite coaching staff.

It’s true that Michigan’s success last season, along with Trey Burke and Tim Hardaway Jr. becoming NBA players, played a role in Kameron’s commitment. But it was more about what the end results of last year indicated: that with the right program, and given all the tools that Michigan affords him, Beilein’s body of work has shown his ability to develop players along with finding on-court success.

"The other schools that we were at might have had more pros than coach Beilein has had. In fact, coach Beilein might have the least amount of experience dealing with pros. But he’s had an extreme amount of success dealing with people," Mr. Chatman said. "Working with what he’s had and making groups of people come together for a greater cause. I think you put him and his 30-plus years experience in a place like Michigan, where he now has top-50, top-100 talent, and now you’ll see the pros come through here. … I think, with the recent success of last year, obviously that was the most apparent success story. And that’s a tribute to their coaching staff and the work that Vall (Jordan) and coach BA (Bacari Alexander) and coach (Jeff) Meyer were putting in. I think Kameron was very impressed with the development of Jordan Morgan and his story. Not necessarily coming in being the guy who could be forecasted to play in the Big Ten as a contributor but will possibly be a full-time starter this year and is also in graduate school. He’ll go on to be successful.

"I think it was a combination of all those things that contributed to Kameron knowing that he couples his work ethic and his attitude with this coaching system, he’s destined to be successful."