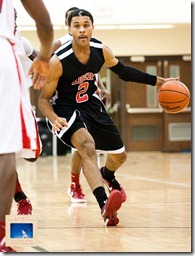 Michigan landed a statement commitment from Kameron Chatman on Tuesday evening but John Beilein hasn’t stopped to celebrate his big win. He’s trying to build on positive momentum. The Wolverine head coach is traveling to see James Blackmon Jr. tonight and things appear to be heating up in the Blackmon recruitment.

James Blackmon Jr. tweeted on Wednesday night before Michigan’s visit that a decision was coming soon and announced a final list of five that included Indiana, Kansas, Kentucky, Michigan and Michigan State.

The timing of the tweet is interesting because Blackmon has only taken one official visit, to Michigan last weekend. Blackmon had previously announced intentions to officially visit Kentucky (October 18th) and Indiana, where he was originally committed, before reaching a decision.

It’s impossible to say what effect Chatman’s commitment will have on Grantham. Chatman told us on Tuesday that he plans to recruit Grantham. Grantham is also a very different player than Chatman, with a much more rugged and physical style of play.

Michigan will host Devin Booker and DJ Wilson for official visits this weekend.

Booker has been one of Michigan’s top targets for years now but Kentucky is strongly considered to be the leader in his recruitment. The Wolverines will have a chance to sway Booker on his official visit. Booker also plans to visit Missouri (10/18) officially before reaching a decision. Booker plans to announce his college decision on October 31st.

Devin Booker informed me last night that he hasn't set an "official" date for an announcement. Two visits left to take.

Wilson is expected to receive a scholarship offer on his trip and the Wolverine are in a strong position for the 6-foot-9 California native. Grantham’s decision could affect Wilson but it won’t affect his visit. Wilson will already be traveling to Ann Arbor for his official visit when Grantham announces a decision. Wilson and Grantham’s games would complement each other well but the frontcourt scholarship chart would start to be crowded.

Javon Bess was offered a scholarship by Michigan State today after Tom Izzo watched him at open gym.

Michigan has been watching Bess as a backup guard option and both John Beilein and Bacari Alexander have been in to watch him play. Bess is also tentatively scheduled to take an official visit to Michigan the weekend of October 18th. Bess will reportedly visit Michigan State this weekend.