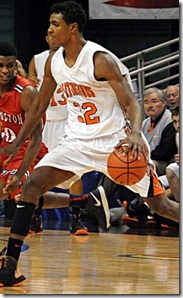 Class of 2014 forward Donte Grantham will announce his college choice on Friday at 9:30 a.m. ET. Grantham will pick between Michigan and Clemson.

Grantham trimmed his list to a top-four of Cincinnati, Clemson, Michigan and West Virginia but for all intents and purposes his final decision is down to Michigan or Clemson.

Grantham’s recruitment has been a long and winding road. At one point in time he had committed to West Virginia but opted to open things back up after he decided to attend prep school at Hargrave Military Academy. That switch, along with the move to the DC Assault AAU program, saw his recruitment soar throughout the summer. Michigan was one of those schools that started recruiting Grantham this summer after watching him in July.

Despite the fact that Grantham rarely speaks to the media, reports have swirled over the last few weeks as to where he might be leaning. At first it was Michigan or Cincinnati, then Michigan was firmly the team to beat. In the last week, Clemson has gained momentum and has reportedly been in the driver’s seat. From everything that we’ve heard, both Clemson and Michigan have had different reasons for optimism but this decision could go either way and Clemson seems to have made the most recent push.

What we do know is this. Grantham took official visits to Clemson, Michigan and Cincinnati. Late last week, he announced that he would be deciding this week. Then word leaked that he would take one additional unofficial visit to Clemson. What that additional visit means is anyone’s guess. He didn’t commit on the trip, which could have happened if it was just one final confirmation visit, and appears legitimately undecided.

· The Michigan recruitment: Michigan jumped head first into Grantham’s recruitment this summer after he impressed with DC Assault on the summer circuit. John Beilein has a number of connections to Grantham’s original high school in Martinsburg from his West Virginia days and the Wolverines offered Grantham a scholarship during his official visit to Ann Arbor for the Michigan-Notre Dame football game. Michigan’s entire coaching staff made an in-home visit on Wednesday afternoon to make its final pitch.

· The Clemson recruitment: Unlike Michigan, who was late to the party, Clemson been recruiting Grantham for as long as anyone. That loyalty seems to have paid dividends as Brad Brownell earned a return visit from Grantham last weekend. Clemson was recruiting Grantham before he emerged as a top-100 player but Grantham also had the opportunity to commit to Clemson as a 2013 prospect and opted to enroll in prep school rather than make that choice. Along with two campus visits this fall, Brad Brownell has also made a number of in-home visits with the most recent coming earlier this week.

Grantham’s time frame hasn’t changed much from what was originally laid out. He planned to take his official visits and reach a decision before the early signing period in November. After his final trip to Cincinnati, a commitment has been expected for the last two weeks or so.

So excited that ima decide 9:30 am ! Annoucement

· At Michigan: Grantham would provide a physical presence on Michigan’s front line. His rebounding ability and aggressiveness would do wonders to complement some of Michigan’s more skilled wing players including recent commitment Kameron Chatman (who visited Michigan with Grantham and plans to put in his own recruiting pitch). Grantham would have to compete for playing time but with the likely departures of Glenn Robinson III and Mitch McGary to the NBA Draft, there’s still plenty of opportunity.

· At Clemson: Grantham would be featured recruit of Brad Brownell’s class and one of the highest rated Clemson commitments in recent years. Clemson has only one commitment in the 2014 class and it’s from a 2-star guard, Gabe DeVoe. Grantham would likely have ample opportunity to play early and often and there’s little doubt that the Tigers are selling playing time. However, Clemson is just 51-45 in three seasons under Brad Brownell.

Grantham’s announcement won’t come at a press conference or on television. He plans to announce his college choice on Twitter at 9:30 a.m. ET. Follow Grantham at @DonteGrantham32 for the latest.

In closing, please remember this is the college decision of a high school kid. Please adhere to the comment standards that have been set forth here on UM Hoops regardless of the outcome.