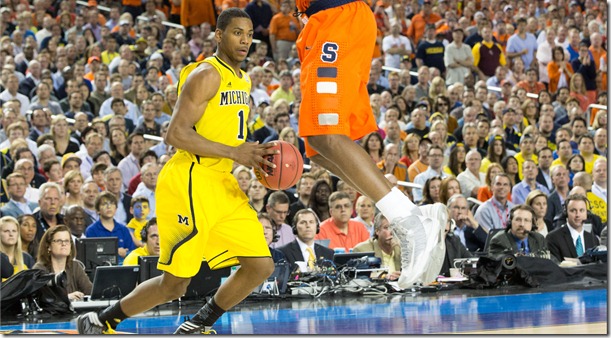 One of the more active conversations leading up to the start of basketball season is the discussion of lineups — which players will play at what positions, who will see more playing time in which roles, and so on.

But while fans speculate endlessly about possible lineup scenarios during fall practices, according to Michigan coach John Beilein, the Wolverine coaching staff does not.

“We’re really flexible (when it comes to positions), so it’s not like, ‘okay, who are we going to play where?’ –yet,” Beilein said during the press conference preceding Michigan’s first full practice on Friday. “We spend a lot of time looking at what our strengths are and trying to develop this thing to those.”

The coaches aren’t particularly focused on filling positions — they are more concentrated on finding out what their players can do and then finding ways to utilize their unique skill sets. Michigan designs its game plan around its personnel rather than vice versa, as can be seen from how the offense has progressed: it’s gone from a motion-oriented strategy meant to get shooters open through off-ball screens to a pick-and-roll scheme intended to enable guard penetration.

This movement has been the result of the players Michigan has brought in over the past few years, namely the boon of talented lead guards Michigan has experienced since Darius Morris and Trey Burke entered the fray. The scheme depends on the players; in a similar way, the needs at each position depend on the players as well.

And over the course of Beilein’s tenure, the Michigan coaching staff has focused on one major attribute when it comes to recruiting: versatility.

“(The positions are) not as defined as maybe you’d see in football and baseball or something like that because we recruit so many versatile young men,” Beilein said. “I was watching the South Dakota State game, trying to pick up some video, and [Tim Hardaway Jr.] was over playing where Glenn plays, at the fourth perimeter spot.

“We pride ourselves on having kids who play a lot of different positions.”

That versatility means that the definition of each position becomes a little more nebulous. Last year, Michigan’s positions broke down into three essential parts: one point guard, three perimeter players and one center. But the multi-faceted talents of Michigan’s players mean that often a player can satisfy the needs posed by multiple roles. Thus, you see instances like the one Beilein referenced, where Tim Hardaway Jr., an off guard for most of last season, was playing at the four position.

This is by no means a concept unique to Michigan. Any recruit over the height of 6-foot-5 knows that in order to be considered valuable he must be able to take the ball inside, handle the ball on the perimeter, and shoot well from anywhere on the court. The days of players developing specialized skill sets are over. The modern high school big man must learn to diversify his skill set to see the court at a program like Michigan.

When looking at the type of player Michigan is going after the hardest right now on the recruiting trail, it’s obvious that versatility is the priority.

The Wolverines recently landed a commitment from a player who represents the prototype of a versatile stretch four: 6-foot-7 perimeter player Kameron Chatman. Chatman will be called upon to replace the void likely to be left by Glenn Robinson III, a player who possesses everything Beilein looks for in a multi-use offensive weapon: athleticism, shooting ability, physicality and high basketball IQ.

But Michigan’s insatiable appetite for player who can play multiple positions won’t allow them to end there. The coaching staff is still pursuing versatile players such as Donte Grantham, Jonah Bolden, DJ Wilson and Javon Bess, many of whom could play as many as four positions.

Beilein said this focus on recruiting long, versatile players who stretch the floor isn’t a new phenomenon, but one originally developed out of necessity that has evolved into a strength.

“It came out of not always being able to recruit the prototypical player at every position when you’re in Division II and at the lower levels of Division I. And then once we got to this level we saw the success that it had, and so we want to be versatile to be able to go either way,” Beilein said. “When you have versatile players, you can do a lot of things other teams can’t.”

Given this conviction, being a versatile team isn’t something that’s only done while searching for players at the high school level — it’s also something that’s emphasized in Michigan’s player development.

Hardaway again is a great example of this philosophy. During his sophomore year, when much was made of his “slump,” Hardaway seemed to pigeonhole himself into the role of shooter. Last season brought a clear emphasis from both Hardaway and the coaches on developing into a  more complete player — one that could, say, fill in at the four position if need be.

During a press conference on Friday, fifth-year senior Jordan Morgan spoke about how versatility is emphasized in practice, especially among Michigan’s big men.

“I think our whole frontcourt has a great staff philosophy. We feel we have a lot of talent in the frontcourt, and we want to be able to play together,” Morgan said. “We’ve put a lot of emphasis on being more versatile and being great passers, being really efficient at knocking down short jumpshots when the time presents itself. Those are some of the things we’ve focused on so we can all be versatile and all be interchangeable on the court.”

The Wolverines look to be even more versatile this season with two of its freshmen: Zak Irvin, a 6-foot-6 perimeter player has a smooth jumpshot, lockdown defensive ability and long limbs for finishing at the rim; and Mark Donnal, a 6-foot-9 forward with a polished post game as well as a very good outside shot.

So while the debate over which players will play where will undoubtedly continue to rage up until Michigan tips off its first exhibition game, fans should be aware that it’s not necessarily where different Wolverines will play but what they can do that will determine playing time this season.