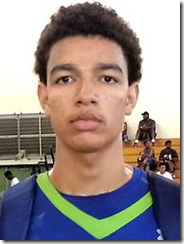 Michigan’s class of 2014 recruiting continued to heat up today as 6-foot-9 forward DJ Wilson committed to John Beilein and the Wolverines.

Wilson committed after his official visit to Ann Arbor this weekend where he was offered a scholarship. He had previously taken official visits to Columbia and Gonzaga.

Wilson is rated as a three-star prospect and a top-150 recruit according to Rivals.com. His exposure over the past year has been limited due back injuries that caused him to miss up to six months of playing time.

More on Wilson including rankings, background story, scouting reports and video after the jump.

Wilson flew relatively under the radar because he missed six months of playing time over the last calendar year due to back issues. He finally returned to action in July on the AAU circuit and caught the eye of a number of major programs. He played very well in Milwaukee (including a great game against Kevon Looney) where he began to draw attention from Michigan and kept up that steady play in Las Vegas.

He settled on three official visits, to Columbia, Gonzaga and Michigan and committed to John Beilein on the final trip.

He averaged 9.7 points and 4.6 rebounds per game for Capital Christian (Sacramento, CA) and helped them to the state semi-finals.

The first things that stand out when watching DJ Wilson are his length and three-point shooting ability. He also has above average ball skills for a player his size and is capable of putting the ball on the floor for a few dribbles toward the hoop. He’s not a guard in a bigger body (like Kameron Chatman), but he’s more capable than many players his size.

He needs to improve his assertiveness and aggressiveness to excel at the next level. Right now there’s a passiveness to his game and that will be magnified against strong competition. Defensively, Wilson has the length to block shots but gets pushed around on the defensive glass. His aggressiveness is partially due to mentality but also strength as Wilson just doesn’t have the frame to bang down low. Athletically he appears above-average on film which is more than adequate given his long arms.

From our video evaluation here at UM Hoops:

Watching Wilson play, everything starts with his jumpshot. His form is picturesque and quick and his consistency was impressive in the film that we watched. He loved shooting corner threes but was comfortable at the top of the key as well and even knocked down a handful of mid-range jumpers.

A lot of players have a jump shot but not many have the size and length that Wilson does. At 6-foot-8, pushing 6-foot-9, he has incredibly long arms which allow him to get his shot off anywhere on the floor. He moves fairly well in the open floor and while he’s not an elite athlete, he’s athletic enough to make the most of his length around the rim. He blocked his fair share of shots and picked up a few easy put-backs due to length alone.

Wilson has missed a lot of action over the last several months due to injuries but he was back on the court Saturday and looked really good. Wilson hasn’t stopped growing and has now hit the 6-foot-8, 6-foot-9 range, only adding to his value as a prospect. Wilson played harder than he has in the past, scored on the offensive glass and hit three triples off the catch. He’s a project but no doubt has upside.

Wilson’s Team Superstar didn’t have the best day, but against the Las Vegas Prospects during an earlier game he showed plenty of promise.

What jumps out immediately about Wilson is his ability to stroke deep jump shots and the ease with which things seem to come to him on the offensive end. Because of his size and skill, he plays as a both a plus-sized wing or a face-up four who can stretch defenses and knock down shots.

At 6-foot-9 with length, a great shot and above-average ball skills, there’s little question that Wilson is a great fit for John Beilein’s offense. However, he needs to gain significant weight before he is ready to play at the high-major level. His early impact potential will be based on how much strength and aggressiveness he can add before his freshman year.

As far as late gambles go, there’s a lot to like about the Wilson commit. There’s a reason he’s undervalued (he missed six months due to nagging injuries) and he’s a perfect fit for what John Beilein wants to do.

Wilson is a four in Michigan’s offense and will help revamp Michigan’s front line along with Ricky Doyle and Kameron Chatman given the likelihood of Mitch McGary and Glenn Robinson III entering the NBA Draft after this season.

Next up, expect the Wolverines to put the full court press on shooting guard prospects James Blackmon Jr. and Devin Booker (who also visited this weekend). Both players are expected to decide by the end of the month and have taken official visits in the last two weeks. Blackmon will visit Kentucky on October 18th while Booker will trip to Missouri that same weekend.

Because Donte Grantham chose Clemson, the Wolverines could also continue to recruit Australian forward Jonah Bolden. Bolden doesn’t plan to decide before the early signing period and has yet to take official visits because he needs a standardized test score.