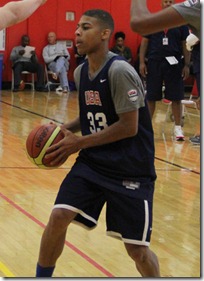 James Blackmon Jr. caused a flury of internet speculation last week when he tweeted that a decision was coming soon immediately before Michigan’s entire coaching staff made an in-home visit. He didn’t commit that evening, as some speculated, but he continues to move closer to a decision.

Blackmon was back on the court over the weekend, participating at USA Basketball’s development camp, and he didn’t disappoint. Blackmon was one of the top performers at the event, demonstrating his full arsenal of offensive skills. ESPN named him a top performer

Blackmon can shoot the ball off the catch and dribble or finish in traffic, but he also has an excellent basketball IQ and feel for the game. He can pass well enough to help at the point, too. Blackmon reads and reacts to game situations like an old veteran, and he is also a threat to drill an open jumper from most anywhere on the floor.

Blackmon also updated his recruitment to Zags Blog, giving some more information on his timeframe.

“I enjoyed it a lot,” Blackmon said. “The coaching staff is just real down to Earth there and they told me that I could come in and make a big impact as a freshman and sophomore year maybe even run the team if I work hard and they get you better.”

Blackmon still plans to take his official visit to Kentucky on October 18th but a decision could be coming in the later-half of this month. He discussed his finalists with Scout.com.

There may not have been a better player during Saturday’s morning session and Blackmon definitely continued his impressive play in the evening. One of the class of 2014’s best shooters, Blackmon had his shot working at a very high level on Saturday, to the point where if he put a shot up, you just assumed it was going to fall. Further, he was drilling floaters, making him even more difficult to guard.

2016 point guard Derryck Thornton (Simi Valley, Calif./Findlay Prep) played extremely well. He is a quick and complete point guard who can push the ball, pass at high speeds, run the offense and score as needed. He has a passion for playing and understands he role based on the environment. Thornton list offers from UNLV, USC, UCLA, Arizona, Oregon St., UTEP, New Mexico, Vanderbilt, Connecticut and strong interest from Michigan, Kentucky and Duke.

Derryck Thornton, Jr. got better as morning went on. In last game, shot was falling, he defended very well and created for teammates.

Really liked how Derryck Thornton embraced playing tough defense and making plays for teammates off the dribble. Was a facilitator.

Thornton’s visit to Ann Arbor with Tyus Battle (another Wolverine target at the USA Basketball Camp) fell through this fall but Michigan has prioritized the class of 2016 lead guard and remains in very good shape in his recruitment at this early stage.

ESPN combed through the class of 2014 to look at some of the top players with pro-potential that will be around for more than a year. Recent Wolverine commitment Kameron Chatman made the cut.

He’s like Copeland in that he’s uniquely talented but perhaps even further away physically. He’s a long, skilled and heady lefty but still potentially growing and not yet totally fluid with his floor game. Give him a chance to develop physically, put him in a college weight training program and add an offensive system built for him and you’ve got a potential star a few years down the road.

Devin Booker also earned a spot on the list due to his offensive repertoire.