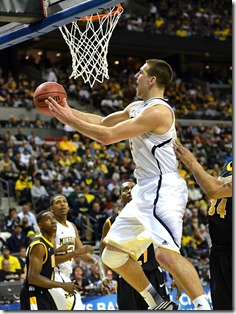 TheMikeMcCarty: McGary’s injury has me wondering if he is the most irreplaceable part of the team. If not him, who?

Mitch McGary changes Michigan’s identity. He raises Michigan’s ceiling from being a very good team to a great team. The NCAA tournament proved as much and McGary should be even more poised to lead the Wolverines.

You can make a case for Derrick Walton at point guard but he’s yet to play a college game while McGary has shown the ability to carry Michigan to the Final Four. Michigan has other big men to lean on if McGary were to be injured, so I think the Wolverines can tread water without him. But Michigan is not the same team without McGary as he’s the one player that can completely change the dynamic of a game.

mistersuits: Who’s going to get the most minutes playing the 2 this year?

If you believe Nik Stauskas, John Beilein and Jeff Goodman, it might be Stauskas:

“In a normal set, the 3-man goes through the play and then stands in the corner,” Stauskas said. “You wait and get the ball when it’s kicked to you.”

Now the plan is for Stauskas to play the majority of his minutes at shooting guard. In the span of two practices last weekend, Stauskas attempted a total of just two shots in the 5-on-5 segment.

“It’s still taking time for me to get used to it,” Stauskas said. “I’m still trying to find my spots.”

While I think it’s important that Stauskas be able to play both the two and three spots in Michigan’s offense, I’m not sure it’s the best fit. Any position on the floor where he’s shooting less doesn’t necessarily make the most sense. He’s a good passer and an underrated driver but his specialty is shooting.

The counterargument to that point is that the two guard might be a harder position to play in Michigan’s offense. Stauskas is more experienced than Irvin which could make the transition easier for Irvin to learn the three spot first (just like Tim Hardaway Jr.) rather than the two.

Caris LeVert and Zak Irvin are two other guys that have the opportunity to play serious minutes at the off-guard. Stauskas, LeVert and Irvin will split their minutes between the two and three positions this year. How many minutes are available for them to split will depend on how Glenn Robinson III’s minutes break down between the three and the four.

It’s also important to remember that this discussion sticks to the offensive side of the ball. The better defender will guard the better defensive player regardless of where they are positioned offensively.

No. Burke averaged 15 points and five assists per game as a freshman and was arguably the best player on a Michigan team that shared the Big Ten crown that season.

Walton is very capable of a having a big season but he’s not going to have a season like that for a number of reasons.

Michigan needs Walton to hit open shots, run the offense and get his teammates involved. In terms of role, Yogi Ferrell’s impact on Indiana last season would be something of an equivalent. While Yogi’s numbers didn’t match Burke’s freshman year, they were still good enough for a spot on the All-Big Ten Freshman team.

wgl2424: Who will be Michigan’s top scorer this year?

This seems like it should be a straight forward question. Michigan returns a couple of lottery picks, is ranked in the preseason top-10 and things should be fairly crystal clear. It’s not.

Glenn Robinson III and Nik Stauskas both averaged 11 points per game last season. Mitch McGary averaged over 14 per game in the NCAA tournament.

All three returning sophomores are prime candidates but don’t overlook freshman guard Zak Irvin. Irvin has proven his scoring ability at the prep and AAU levels and while scoring at the high-major college level is a big adjustment, he is wired to create his own offense. Irvin’s comfort shooting off of the bounce and catch could prove critical early and often.

I would put the safe money on Mitch McGary for leading Michigan in scoring, assuming he’s healthy. However, No. 2 might just be Zak Irvin as I think he could be the most comfortable taking on a volume shooting role within Michigan’s offense.

jlustig22: UM had the good fortune of having Morris & Burke control the ball at end game & clock situations but who will handle that role now?

Similar to the scoring question, there’s no great answer here.

Trey Burke took 84 field goals in late clock scenarios, Tim Hardaway Jr. took 45. All numbers from Hoop-Math. We examined some of these numbers for Synergy Sports earlier this offseason but the bottom line is that Michigan doesn’t have a proven option.

Throw Zak Irvin and Derrick Walton into the mix as well but I suspect it will be closer-by-committee. I suspect Irvin will get more opportunities than many might expect (he’s already earned a mention from Bacari Alexander) but Stauskas and Robinson will also be key options.

kevinwilliams07: What kind of impact do you expect the freshman to have this season?

Zak Irvin and Derrick Walton are almost guaranteed to be rotation players, I would bet that both are starting by Big Ten season. Mark Donnal has a unique skill set – a big man that can shoot the three – but the frontcourt appears crowded with Mitch McGary, Glenn Robinson III, Jordan Morgan, Jon Horford and Max Bielfeldt. Donnal has a lot of potential but Michigan could get away with red-shirting him this season.

BrentAccurso: who do you expect to be the PG at the start of the year? What about at the end?

At the end of the year I would be shocked if anyone other than Derrick Walton is starting at the point guard spot. He has too much talent and eventually that will prevail. Depending on Walton’s adjustment in the early season, I could see John Beilein leaning on Spike Albrecht in early season games as a more trusted option

andy19il: How often do you think we’ll see Spike and Walton on the court together?

John Beilein proved that he isn’t scared to play two (small) point guards at the same time last season – as long as they bring something to the table.

Albrecht can shoot it and he can pass it, which is good enough to get him on the court in a tight spot. You have to question how often Beilein could get away with playing two 6-foot and under guards though given that Albrecht isn’t a great defender.

The main reason we might not see a lot of this is because Michigan has a multitude of options at the two and three positions, there’s no need to stretch Albrecht or Walton beyond the 40 minutes at the point guard spot.

tomgritter: Who will have the better NBA season, Trey Burke or Tim Hardaway Jr.?

Trey Burke, who scored 12 points on 5-of-12 shooting in his preseason debut, seems like the easy choice despite his summer league struggles. Burke hasn’t been officially named the starter but it would be surprising if he didn’t eventually win the job.

Tim Hardaway Jr. could make an impact for the Knicks but he’s not likely to have the same opportunity. Iman Shumpert is likely to start at the shooting guard and reigning sixth-man of the year J.R. Smith was re-signed. Hardaway and Beno Udrih will provide additional options on the wing. Despite more limited opportunity, Hardaway could be in a perfect role. He scored 16 points on 6-of-10 shooting in his preseason debut against the Celtics including knocking down a game winner with 8.2 seconds remaining.

I’ll stick with Burke as I’m confident that eventually he’ll find his groove at the NBA level but Hardaway should have a strong rookie year as well.