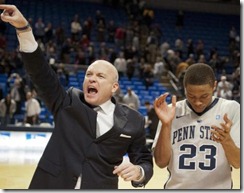 Over the next couple weeks, we’ll preview the Big Ten on a team-by-team basis. Today, we start with Penn State.

For many Michigan fans, Penn State represents the low point of Michigan’s otherwise spectacular season. On February 27th, near the close of a brutal Big Ten season, the Wolverines traveled to Happy Valley to play a Nittany Lion team that hadn’t won a Big Ten game to that point. Inexplicably, Michigan lost 84-78. However, upon further reflection, that game signified a watershed moment for a program that is actually on the rise.

At that time, Pat Chambers’ team was due for its first Big Ten win after narrow losses at Illinois, at Michigan and against a tough Iowa team at home — Penn State may not have been winning games, but they were competing hard in the best basketball conference in the country. Not to mention they were doing this without their best player, guard Tim Frazier, who suffered a season-ending injury just four games into last season. The Nittany Lions enter this season with some key returnees as well as some extra weapons on offense and look poised to take the next step in the development of a traditionally basement-dwelling program.

Departures: The most obvious loss for Penn State comes from the unexpected transfer of guard Jermaine Marshall to Arizona State. It’s possible Marshall simply saw the writing on the wall with Frazier’s return to action and DJ Newbill’s obvious indispensability — that backcourt became crowded awfully quick. Regardless, the loss of Marshall means a dropoff in experienced depth as well as solid scoring; Marshall was Penn State’s second-most used player, behind only DJ Newbill, and averaged 15 points per game.

The Nittany Lions suffered a lower-profile loss with the graduation of Nick Colella. The utility man wasn’t a stat-stuffer but proved useful last season for leadership purposes and the occasional long-range bomb. He hit some crucial shots against Michigan down the stretch in both Michigan’s loss in Happy Valley and in their matchup in the Big Ten Tournament.

Returners: These guys are obvious: Penn State returns two of the Big Ten’s best guards in DJ Newbill and Tim Frazier. Frazier missed almost all of last season after suffering a ruptured Achilles early on in the campaign, but figures to return to pre-injury form — a frightening prospect for Penn State’s opponents. During the 2011-12 season, Frazier’s last full one with the Nittany Lions, the guard averaged over 16 points per game and registered an assist rate of 45 percent — good for second in the nation. Frazier is the real deal, and if he plays like he was capable of playing before his injury, he will be a force for Penn State this season. The second threat presented by the Nittany Lions’ two-headed backcourt monster is DJ Newbill. Newbill’s exploits last season in the absence of his backcourt mate were admirable, averaging 16 points per game to go along with five rebounds and four assists. It may take Penn State a little while to figure out how these two scorers can complement each other – they both only know life as high volume shooters on a below average team – but if they do, they will have one of the most potent backcourts in the Big Ten.

Newcomers: To the rescue of Penn State’s backcourt depth comes a couple of key transfers: John Johnson, a sharpshooter from Pittsburgh, and Allen Roberts, a graduate student transfer from Miami (OH) who averaged 12 points per game last season for the Redhawks last season. Johnson transferred from the Panthers after it appeared he would be relegated to a bit-part role this season with the emergence of freshman Pittsburgh point guard James Robinson last season, and will be available to play second semester. Johnson should help the Nittany Lions with his long-range shooting, an area where they struggled mightily last year, shooting just under 30 percent from beyond the arc. Roberts has a reputation as a solid scorer from the perimeter and was Miami’s most-used player last season. Both should be able options when it comes to spelling Newbill and Frazier this season.

Best-case scenario for 2014: DJ Newbill and Tim Frazier bring out the best in each other, and perhaps their 3-point shooting improves enough to lift Penn State’s dismal percentage from the past couple years. The Nittany Lions’ suspect frontcourt proves the doubters wrong and the forward trio of Ross Travis, Donovan Jack and Brandon Taylor do what they need to do: rebound, finish and defend. Frazier is an All-Big Ten first teamer and the Nittany Lions pull off a massive home upset or two but still can’t win on the road and end up in the NIT.

Worst-case scenario for 2014: The lack of talent in the frontcourt proves to be a legitimate weakness. The Nittany Lions are exposed by the talented front lines in the Big Ten and still struggle to avoid foul trouble and defend around the rim. Frazier and Newbill are productive but still relatively inefficient. Penn State comes close to a couple of big wins but just can’t compete with other Big Ten teams on a consistent basis and finish the year in the conference’s cellar once again.