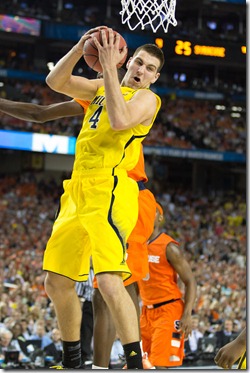 As the 2013-14 season nears, we run down some of the best players in the Big Ten by specialty. We start with the league’s top ten rebounders (returning players only).

It remains to be seen how effective Mitch McGary will be during the early part of this season after a “lower back condition” that has limited him in the offseason came to light last month, but it’s tough to argue there’s a better rebounder in the Big Ten right now. During limited playing time throughout non-conference play and the Big Ten season, McGary displayed an uncanny nose for the ball and a willingness to do whatever it took to clean the glass effectively. But when his playing time increased during the NCAA tournament, Michigan’s talented big man really showed what he was capable of, averaging over 10 rebounds per game during the Wolverines’ run to the national title game. What makes McGary’s rebounding ability truly unique among his Big Ten counterparts is its balance between the offensive and defensive sides of the ball: McGary’s offensive rebounding percentage of 16 percent last year placed him first in the conference and his defensive rebounding percentage of 22.4 placed him third in that category. Last season, McGary was already out-rebounding veterans like Trevor Mbakwe. If he’s healthy, he should be a dominant rebounding force this year.

Michigan State’s premiere big man improved in just about every area of his game last season — his offensive efficiency was up, his 3-point shooting improved and he proved to be a more versatile option on offense than many thought — but perhaps the biggest leap his game took was his improved reliability on the defensive glass. Payne went from grabbing just under 17 percent of available defensive rebounds in 2011-2012 to pulling down an impressive 24 percent last year, placing him among the elite defensive rebounders in the country. The question is, will Payne be able to replicate or improve last season’s rebounding success? Derrick Nix wasn’t a great rebounder last year, but the big man cleared out space in the post for Payne to grab boards. Without his big body, Payne could experience more difficulty clearing out his own space and will have to rely on his lengthy frame to grab boards, something he’s capable of doing. Regardless, when the Spartans and Wolverines meet this season, Payne and McGary are likely to wage a rebounding battle for the ages.

Fans in West Lafayette are going to be expecting a lot out of AJ Hammons this season after what was a highly successful freshman campaign at Purdue. Hammons is extremely talented and his size makes him an especially tough matchup in the post. And with his weight down from 280 to about 250 entering this season, not to mention a year of experience, Hammons is poised for a potential Big Ten player of the year run. His rebounding last season was good, but it could obviously be improved. Purdue coach Matt Painter was frustrated at times with his NBA prospect’s effort on the court, leading to a benching to start the Boilermakers’ game against Northwestern last season. However, working through those sorts of kinks with a young talent is normal, and expect Hammons to be much better on the glass this year, especially on the defensive end.

Iowa is a team on the rise, and the addition of talented players like Adam Woodbury is a big reason why Fran McCaffery’s Hawkeyes’ fortunes are looking up. Woodbury is also one of the major reasons Iowa saw improvements across the board in both defensive and offensive rebounding percentages last season compared to the 2011-12 campaign. Standing at 7-foot-1, Woodbury is one of the tallest players in the Big Ten and has the length and toughness to compete with any post player on the glass. While he has all the tools, Woodbury must be more consistent than he was last season. While it’s true that increased playing time will aid in that regard (Woodbury averaged just over 16 minutes per game last season), games such as the one against Maryland in the NIT semifinal, in which Woodbury played 29 minutes and grabbed just three total rebounds, aren’t going to cut it.

Mitch McGary’s big man counterpart has been steadily improving his rebounding each year, and last season was Jordan Morgan’s best yet on the glass. The Wolverines’ two post players call upon their own unique playing styles to get boards: McGary uses his natural ability and relentless pursuit whereas Morgan utilizes excellent positioning and years of experience. The duo’s mutual success under the glass didn’t translate to a great rebounding year for Michigan, it’s easy to see why; Morgan’s most productive stretch of the season coincided with McGary learning the college game and getting acclimated to Big ten play, while McGary’s emergence came only after Morgan’s devastating ankle injury and subsequent prolonged recovery. With Morgan professing that last year’s injury is fully healed, if McGary can recover quickly from his lower back injury, Michigan’s two most prominent big men could combine for a rebounding force this season.

Last season saw a drop-off in Dawson’s offensive rebounding production along with better numbers on the defensive side. One reason for that could have been the recovery Dawson went through after tearing his ACL last offseason. But considering how essential his offensive rebounding is to his overall offensive production, Michigan State fans are hoping to see a fully recovered Dawson next season and an uptick in his rebounding.

Iowa’s sixth man has experienced an odd career arc with the Hawkeyes. His playing time has decreased each year since he arrived at Iowa City, and his rebounding numbers have fallen off since then, as well. As a freshman, Basabe grabbed 13 percent of available offensive rebounds — last season, that number was down to 10.2. However, he still remains one of the better rebounders in the conference and ranks fourth among returning players in rebounds per 40 minutes.

Williams played limited minutes last season, splitting time in the front court with Evan Ravenel, but he was effective on a tempo free basis – especially on the offensive glass. Williams rebounded 12.3% of Ohio State’s misses while he was on the floor. That was fourth best in the league last season and second best to Mitch McGary among Big Ten returning players.

Valentine might not be a name you’d expect to find on this list but he’s arguably the best rebounding guard in the conference. Valentine averaged 8 rebounds per 40 minutes in Big Ten play last season, 10th best among returning players.