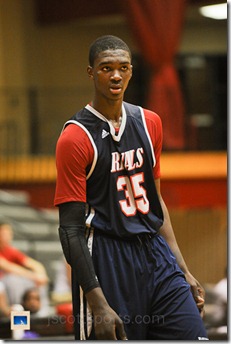 As the 2013-14 season nears, we run down some of the ten most promising newcomers (freshmen and transfers) in the Big Ten this year. Previously: Big Ten’s Best Rebounders

Vonleh is the highest rated freshmen in the conference this season and he should play a major role for an Indiana team that lost two lottery picks in Cody Zeller and Victor Oladipo. Vonleh’s best basketball is ahead of him as he’s young, he’s 6-foot-8 with a 7-foot-4 wingspan and is projected as a top-10 pick in the 2015 NBA Draft. Vonleh should provide the flexibility to impact Indiana’s front line at a multitude of positions. His scoring might develop slowly, but his rebounding and defensive impact will be immediate.

Irvin is the next highest rated Big Ten freshman on the list and he should also have plenty of opportunity as Tim Hardaway Jr. will leave a void on the wing in Ann Arbor. Irvin is a pure scorer with a diverse game that’s comfortable shooting off the bounce and off the catch. He should fit right in alongside Nik Stauskas and Glenn Robinson III. While Stauskas and Robinson should take on bigger roles this year, they were both every game starters last season and someone has to replace Hardaway’s 35 minutes per game. Irvin should also shore up Michigan’s perimeter defense with his length and athleticism in the backcourt. Beilein has already praised Irvin for his offense, calling him a “hunter” on the offensive end of the floor, as well as his willingness to defend.

Walton is likely to be Michigan’s third true freshman starting point guard since 2009. The last two are in the NBA and John Beilein can only hope that Walton hits the ground running as smoothly as Trey Burke did two years ago. Walton’s feel for the point guard spot, especially in transition, should be critical to maintaining Mitch McGary and Glenn Robinson III’s offensive production. Walton will have more talent around him – Robinson, McGary, Stauskas, and Irvin – than Burke as a freshman and that should help ease the transition from day one.

Webster is being touted as something of a savior for Nebraska basketball. He’s a 6-foot-4, 205 pound guard with international experience that Tim Miles deserves all the credit in the world for finding. Webster emerged after averaging 13.5 points per game in Olympic Qualifying with New Zeeland and drew high-major interest from NC State, Pittsburgh, Wake Forest, Vanderbilt and Virginia. It may sound harsh, but a state-side player of Webster’s caliber probably wouldn’t end up at Nebraska in this day and age. It wouldn’t be surprising for Webster to start in the Cornhusker backcourt from day one and make an immediate impact.  “I think he kind of likes the expectations,” Coach Miles told reporters. “I think Tai Webster enjoys the idea he can come in and make a difference and fans expect a lot.”

Rice sat out the 2012-13 season after transferring from Drake where he started 62 of 64 games in his career. While Rice isn’t the most efficient player, he’s an experienced career 15 ppg scorer and should be able to step in alongside Tracy Abrams and help replace Brandon Paul and DJ Richardson in John Groce’s backcourt. Rice’s top ability is getting to the charity stripe, something Illinois did very little of last season. Rice posted a free throw rate of 48% in his final season at Drake while the Illini ranked 295th in free throw rate last season.

Williams was ESPN’s No. 6 prospect heading into summer of 2012 and while his stock slid a bit, he’s still more than capable of making an immediate impact in Indiana’s young rotation. The Hoosiers will feature six freshmen on their roster so Williams should have an opportunity to make an impact with his athleticism. One cause for concern? The 6-foot-7 forward is nursing a hand injury which has sidelined him during early practices.

You are probably familiar with his older brother Eric and his younger brother Eron (a promising 2016 guard on Michigan’s recruiting radar) but Evan made the 5th-year transfer from Arizona State and will be eligible to play immediately. As one of just two upperclassmen on the roster, 10 point per game scorer should be able to contribute from day one.

Uthoff created quite a transfer controversy when he opted to leave Wisconsin and Bo Ryan attempted to limit his transfer options. The 6-foot-9 forward was in the same high school class as Trey Burke and Victor Oladipo but has yet to play a college game after a redshirt year at Wisconsin and a transfer season at Iowa, now he’ll finally take the floor. Known as an outside-inside threat, Uthoff should add to an already impressive Hawkeye front line.

Top-75 freshmen is a lefty combo guard with the athleticism to get in the lane. He seems best suited as a sixth man, providing an explosive scoring lift off the bench behind Abrams and Rice but we like his opportunity to make an impact.