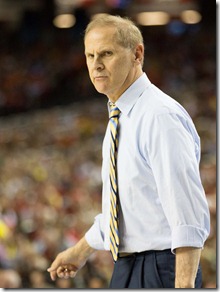 The Wolverines were ranked 5th in last year’s preseason poll and spent the entire season ranked in the top 11. Michigan ended last season ranked No. 2 overall after a loss to Louisville in the National Championship.

The Wolverines are one of five Big Ten teams in the preseason top 25 and the second highest rated conference school. Michigan State is ranked highest among league teams at No. 2 while Ohio State (10), Wisconsin (21), and Indiana (24) are also ranked. Michigan will also face No. 4 Duke, No. 5 Arizona and could face No. 15 VCU in the non-conference season.

Michigan has also been tabbed as a preseason top-10 team by Lindy’s, Sporting News and Blue Ribbon.

Find the full poll after the jump.