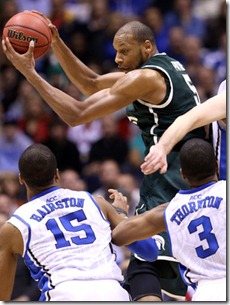 As the 2013-14 season nears, we run down some of the best players in the Big Ten by specialty. Today, we continue with the league’s top ten post scorers (returning players only). Previously: Best Defenders, Best Newcomers, Best Rebounders

The Big Ten some great post players last season in Derrick Nix, Cody Zeller, Jared Berggren and Trevor Mbakwe but another wave of young, talented post players with great potential and limited production is waiting in the wings. That made establishing this list somewhat difficult. Another mitigating factor is the rarity in today’s game of true back-to-the-basket post players. Many teams want their big man setting picks and finishing at the rim rather than establishing one-on-one post position and calling for the ball on the block.

We looked at some advanced stats, courtesy of Synergy, and used them to come up with the rankings below. %Time indicates the percentage of offensive possessions each player spent in the post, and %Score indicates the rate of success of said post possessions —  the percent of his post touches that resulted in points. We also used the Points Per Post Possession (PPPP) metric.

Adreian Payne finds himself at the top of this list not necessarily because of his post-up production last season but because he is the most offensively advanced big man in the conference and with Derrick Nix gone, there is little doubt Tom Izzo will find more post-up opportunities for his returning star. Nix spent a shocking 58 percent of his offensive possessions posting up, thus limiting Payne’s opportunities on the block. Payne instead spent most of last season expanding his game, notably improving his 3-point shot and perimeter ballhandling. However, it’s difficult to imagine a Michigan State team without a strong post presence, and Payne has all the tools to increase his effectiveness in post-up situations.

Purdue’s rising star is of an increasingly rare breed: a true college center. Hammons spent 56 percent of his offensive possessions on the block, and he displayed a surprisingly advanced repertoire of post moves for a freshman. One of Hammons’ strengths is knowing exactly how to use his big body to create space in the paint — he is skilled at sealing off his defender and creating a big target for his guards to get the ball to. From there, he’s aggressive with the ball and quick enough to employ a lethal drop-step — and once Hammons gets to the block, he’s tough to stop. He showed flashes of brilliance last season — see his 30-point explosion against Indiana — but Purdue coach Matt Painter will look for better consistency from his center next season.

Like Hammons, Iowa’s Adam Woodbury has through-the-roof potential. The scoring load for the Hawkeyes fell mostly on Roy Devyn Marble and Aaron White (and Mike Gesell when he was healthy), so the freshman didn’t get a ton of looks in the post. While all three of those players return this season, look for Woodbury to have an increased role in the offense with one year under his belt. The 7-footer is a pure back-to-the-basket player, and his skill set indicates as much: Woodbury has an excellent hook shot combined with great low-post footwork. However, Woodbury’s production really dropped off in Big Ten play last season, and he needs to work on his conditioning — he played only 41 percent of available minutes last year for the Hawkeyes.

Illinois’ talented big man was a serviceable post scorer last season, but one big factor held him back: his slim figure. At 6-foot-11 and just 235 pounds last season, Egwu had difficulty at times establishing post position. Reports this offseason indicate Egwu has gained 15-20 pounds, which will undoubtedly help him this coming year. Egwu was also unpolished offensively as a sophomore and this offseason was surely focused on refining his post moves so that he can develop into the reliable inside scorer the Illini are hoping for. If Egwu is able to bang with other Big Ten post players in the post this season and touch up his footwork and offensive moves, look for a big season from the Illinois forward.

Northwestern’s big man showed flashes of greatness last season, but his inconsistency was frustrating for Northwestern fans. Olah has all the tools: not only is he seven feet tall, but at 275 pounds he is a physical force. He is also relatively athletic, scoring off numerous on-ball pick-and-rolls last year. However, Olah experienced issues consistently catching the ball in the post and struggled with his mid-range jumpshot throughout the season. It remains to be seen how Olah will be used in new coach Chris Collins offense, but if he can be more consistent in his offensive production, Northwestern will be a team to be reckoned with.

Aaron White spends precious little time in the post, but when he does he tends to score. White’s game is similar to what Adreian Payne’s turned into last season — White is athletic and versatile and while Payne is stronger, White’s jumpshot is better. With a crowded frontcourt that includes Woodbury, Melsahn Basabe and now Jarrod Uhtoff, it’s difficult to predict whether White will move his game outside or inside.

Sam Dekker spent even less time down low than White, which should put his ridiculous 1.19 points per post touch number in its proper context. Dekker was mostly a perimeter player last season, but with Wisconsin losing Mike Bruesewitz and Jared Berggren, there’s a chance Dekker could spend more possessions in the paint as Bo Ryan allows his forwards to play with their backs to the basket.

As with Dekker, Kaminsky will be expected to step up his game with the departure of Wisconsin’s frontcourt this season. Kaminsky is more of a natural post player than Dekker, and his offensive efficiency last season was great in limited usage. Reports out of Wisconsin’s trip to Canada for some exhibition games indicate Kaminsky is establishing a strong inside-out game with Badger guard Ben Brust.

Williams was limited offensively last season but did score on the few occasions where he sealed his man and received the ball on the block.  However, his development as a post player is so integral to Ohio State’s success this season, and his talent level is so high, that I’m willing to bet Thad Matta and his coaching staff will trot out a much-improved Amir Williams this year.

Michigan’s talented big man doesn’t really deserve a spot on this list. He spent almost no time posting up, and the numbers indicate he wasn’t very successful when he did. But it’s also very hard to find 10 established low post scorers in the conference. McGary will almost certainly have an increased role in post offense this season, and without Trey Burke he will have to figure out other ways to put the ball in the basket besides finishing off pick-and-rolls. Look for McGary to improve his post game and use his quickness and strength to score consistently down low.