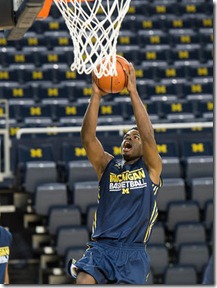 It’s a well-known trope in college basketball that the most difficult concept for freshmen to grasp is defense. And for the majority of players, it’s true — adjusting to the speed of the college game can be difficult for even the most talented first-year players.

But according to Michigan’s coaching staff, it appears the Wolverines have a couple of anomalies in freshmen Derrick Walton and Zak Irvin. While it’s inevitable that the two guards will experience defensive ups and downs throughout the season, the coaches are excited about their defensive potential.

Michigan assistant LaVall Jordan said he has enjoyed getting to know Derrick as the guards coach and is looking forward to seeing what he allows the team to do defensively.

“It’s been good to get to know (Walton) better, spend some time with him, have some conversations,” Jordan said during an interview on WTKA’s Michigan Insider on Tuesday. “You know, you get to know these kids and develop a relationship and understand where they’re coming from and why they make the decisions that they make. That’s the fun part for us as coaches and mentors. One of the things that’s exciting about this team is defensively, being able to play with more size, more quickness on the perimeter, he’s shown the ability to really be able to get after it defensively. I think he’ll be a guy who, once he learns more about what we want to do and our defensive schemes, I think he has the ability to be a really good defender on-ball and off the ball.”

While Walton has been impressive on the defensive side of the ball, it was Zak Irvin who came in with a stellar defensive reputation. Cutting his teeth on the AAU circuit, Irvin routinely matched up with the opposing team’s best player and consistently displayed a natural talent for on-ball defense.

Irvin’s long arms on his 6-foot-6 frame make him an ideal perimeter defender for John Beilein’s defense. But it’s not just his physical tools that make him a potential defensive standout — it’s his ability to grasp Michigan’s defensive principles that impressed Michigan assistant coach Jeff Meyer.

“Zak has come in, and he has really picked up our defensive principles in a hurry — getting into the gaps, building walls, recover,” Meyer said during the WTKA interview. “And defensively, being able to get to the position you need to be in so that you can have the trust level built trust-wise into your defensive concepts. Zak has done an outstanding job of focusing and committing to the defensive end of the court. He’s doing an outstanding job with his length, his mindset, his understanding of what we’re looking for.”

The defensive progression of the two freshmen may be considered a pleasant surprise to this point, but it’s also reassuring the coaches that their offensive ability is as good as advertised. Both players are athletic and have the ability to create plays, with Walton usually creating for others while Irvin finishes his own.

Irvin, Meyer added, has already shown that he can create his own shot against college competition — his own teammates during practice. However, that ability is tempered by a tendency to get down on himself, a la Tim Hardaway Jr. The coaches are working to build his confidence and encouraging him to move on from bad possessions.

“Offensively, (Irvin is) very very comfortable shooting the basketball,” Meyer said. “A little bit like Tim in terms of the ability to really get a shot off, a good look, pretty much any time he needs to, which is really a gift because he has the ability to extend and separate off the bounce and with his shooting ability. The whole idea of him being able to add value and make contributions early seems very positive. He is a little bit like Tim in that every possession is a competitive possession for him. He can be tough on himself if it doesn’t go well for him. We as a coaching staff, as mentors, are aware of that and we try to stay positive with that and keep him in a positive mindset. He can be really tough on himself because he is a great competitor.”

Where Zak creates his own shots, Walton creates for others. Jordan especially praised Walton’s ability to find the sweet spot with his passes, knowing not just when to hit his teammates but even where they like the ball when they catch it and placing them in a position to finish with said ball placement.

According to Jordan, Walton is more of a pass-first point guard than departed Michigan lead guard Trey Burke was.

“Derrick, he’s a competitor. It’s been good to watch. In practice, the battles at matchups and when we scrimmage have been intense,” Jordan said. “I think he’s a really gifted passer, to where he can make it easy for guys to just catch, whether you’re a shooter spotting up on the perimeter or whether you’re a big cutting or rolling through the post near the basket, Derrick can find you. That’s his gift and just something he does really well.

“In terms of the conversations that we’ve had over the past couple weeks, looking to score more, to be able to set up the pass. Trey was more of a hunter by nature. Trey could compete and you were always worried that he could get 30 on you, whereas Derrick has the ability to score and finish around the basket, and he can make the jumpshot when he’s open, but his first instinct is to look for others. Just having the conversation of how and when to do what and finding that sweet spot. As a young guy, you’re trying to do what coach says, you’re trying to run the plays, you’re trying to understand how everything goes here, but not losing that aggressive instinct and what you do and what you bring to the table naturally is always a sweet spot as a freshman.”