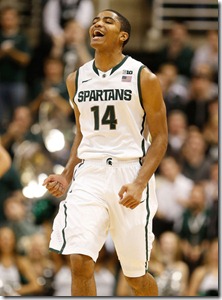 As the 2013-14 season nears, we run down some of the best players in the Big Ten by specialty. Today, we continue with the league’s top ten shooters (returning players only). Previously: Best Rebounders, Best Newcomers, Best Defenders, Best Post Scorers

Some of the best shooters in the league, including Jordan Hulls, DJ Byrd, Deshaun Thomas, Christian Watford, Trey Burke and Tim Hardaway Jr., have moved on but there’s still plenty of shooting talent in the conference

Harris made 42-of-89 threes in Big Ten play, the best percentage among returning players. He’s a lethal shooter in transition and is comfortable spotting up on the wing. His game is almost certain to diversify this season as his role grows in the Spartan offense but his shooting stroke is pure. One place where Harris could improve is shooting off of screens. Tom Izzo has always been one of the best at setting up his players off the ball but Harris had just a 41.9 eFG% when shooting off screens. A top candidate for Big Ten Player of the Year and a projected top-20 NBA Draft pick, Harris should put up big numbers this season.

Michigan fans need no reminder of Nik Stauskas’s shooting ability. His 1.443 points per catch and shoot possession and .984 points per shot off the dribble are the best among qualified returning players. Stauskas shot 44% from three-point range for the year, hovered around 50% for much of the non-conference season and knocked down six threes in the Elite Eight. Why isn’t he number one? His shooting regressed in Big Ten play as his 37% in league games ranked just 12th last year. Much will be made about increased offensive responsibilities for Stauskas in his second season but his three-point shot is still his most important asset. Stauskas as a 40-percent plus shooter over the course of the entire season is an incredible weapon and will open things up just as much as his ability to slash or pass the ball.

Hollins might not be the first name that comes to mind but his numbers. Hollins shot 40% from long range in Big Ten games last season (41.8% for the year) and is unique because of his ability to shoot off the dribble. Hollins scored .908 points per possession when shooting off the dribble, which is second best among returning Big Ten players with at least 25 attempts. There will be growing pains under new head coach Richard Pitino but Hollins still should lead one of the more battle tested backcourts in the conference this season.

Brust hit an iconic three-point shot against Michigan in Madison last season but he was a pretty good shooter in other games as well. Brust has been remarkably consistent over his career despite a high volume of three-point attempts. He shot exactly 38.9% on 203 long range attempts in 2013 and 38.9% on 149 attempts in 2012. There are questions down low for Bo Ryan but Brust is one of the more reliable shooters in the conference.

We love Dekker’s potential this season as Bo Ryan allows him to emerge as a focal point of the Badger offense. Ryan Evans and Jared Berggren are gone in the frontcourt which means Dekker should have significantly more opportunities. He was an effective shooter last year, shooting just shy of 42% from three-point range in Big Ten games. He was under-utilized last season, using just 21.8% of Wisconsin’s offensive possessions, but expect him to have the green light in his sophomore season.

Crawford shot 41% from three-point range in his last full season and back after taking a medical redshirt last season due to a shoulder injury. His 2012 shooting numbers (on 148 attempts) are strong enough that he would belong in the top five of this list. We’ll leave him here to prove his health but he should play a critical role in Chris Collins’ first season at Northwestern.

Ohio State attempted the third fewest three-point attempts in Big Ten games last season but Smith was the primary Buckeye threat after Deshaun Thomas. Aaron Craft is the resident defender, Shannon Scott is the distributor but Smith has established himself as a consistent shooting threat over the past two seasons .

Another player that missed 2012-13 due to injury, Gasser made 45% of his threes during his quiet but steady freshman season. Brust and Dekker will both take their fair share of threes but Gasser should play a critical role.

Gallegos gets a spot on the list for effort.  He led the Big Ten in 3-point attempts and makes and we can only hope that his efficiency will improve as Nebraska improves. Tim Miles wouldn’t have given Gallegos the green light for 271 attempts if he hadn’t shown at least some promise.

Ross shot 39% from long range on 90 attempts last season and will attempt to fill the scoring shoes of Deshaun Thomas. He’s unlikely to shoot 209 threes, as Thomas did last season, but there’s little question that he’ll see more minutes and more opportunities this year. Ross scored 1.09 points per jumpshot last season, the 12th best mark in the conference.