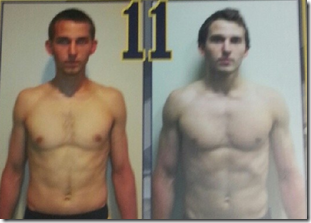 The Michigan basketball team held its media day on Thursday for a packed house — when you go to the national title game the year before, your media events tend to have a few more butts in the seats than in years past. John Beilein spoke during the initial press conference and touched upon a wide variety of subjects, from Mitch McGary’s injury to Caris LeVert’s defense to his freshmen adjusting to the college game. After Beilein spoke, assembled media got a chance to speak with all the players individually. Then, we got to watch an hour of practice. There was a lot of buzz swirling around Crisler Center, and we’re here to clear the way to the four major takeaways from this year’s media day.

Michigan’s coaching staff is staying tight-lipped about the “lower-back condition” the Wolverines’ star center is suffering from. All we know is that McGary isn’t practicing or doing anything that strenuous outside of rehab. At practice, he did little but shoot a few free throws, though he didn’t have the outward appearance of being physically hampered in any way.

Parsing John Beilein’s words on the subject, it’s possible the coaching staff is just being extra cautious with one of its most important players.

“He’s making great progress, but we’re super cautious,” Beilein said during the press conference. “He’s been doing underwater treadmill workouts that are really productive. I know I couldn’t do some of those, and so it’s really good but we’re being very cautious as well. If he keeps making this progress day after day (he’s still day-to-day), one of these days he’s going to have to get out there to see what he can do. But we’re very cautious.”

If you’re wondering whether or not we’ll see McGary during the exhibition season, Beilein has no answer for you.

“I can’t answer the date or the days, all I know is that the improvements are really good right now,” Beilein said. “Everyone else is pretty good.”

Whether the coaching staff is just being overly cautious or McGary is in real danger of missing significant time, the injury has succeeded in stressing out the Michigan fan base. Unfortunately, it appears we won’t know the extent of the injury until McGary starts playing — or doesn’t.

For his part, McGary appeared to not be terribly bothered by it.

“(The back) is good. It feels great. Right now, I’m day-to-day,” McGary said during the interview session. “Right now, I’m just trying to do what I can to help the team.”

Every year, returning players make progress in the weight room and in their skill development. For Michigan, this could mean the rich get richer — Mitch McGary is slimmer and far more muscled than he was at this point a year ago, and Glenn Robinson III looks like a comic book superhero. However, it also means some serious forward steps for players who aren’t as physically gifted. Two of those players in particular — Nik Stauskas and Caris LeVert — stand out in that regard.

Throughout media day, players and coaches alike were raving about the progress each had made athletically and in the weight room over the course of the offseason.

“[Caris and Nik] both have gotten a lot stronger. They’ve both put in a lot of work , hard time in the weight room,” said Spike Albrecht, whose own physical progression is nothing to shake a stick at. “You can tell in how much better their verticals are, how their athleticism has increased. They’ve gotten a lot better. It just gives you so many more options. Knowing that they can play so many positions is just going to help us out in the long run.”

Glenn Robinson III noticed the duo’s increased physicality, as well, and noted one important area where he believes it helps the most — defense.

“They’ve both gotten quicker and are jumping higher. And their defense has improved,” Robinson said. “Every time those two are on the court, we tend to become a better team in practice. They’ve been working hard in the gym, and they continue to knock down shots like crazy. They could be a defensive nightmare or an offensive nightmare.”

You would think that after going through last season — a season that saw his young team ranked in the top five of most preseason polls and then subsequently exceed sky-high projections — that John Beilein would be comfortable with high expectations.

But he’s not. At least, he doesn’t appear to be. Beilein continues to balk at the expectations question — it’s not that he shies away from high expectations, he just finds what the preseason polls say very, very irrelevant.

“I think a lot is premature,” Beilein said of his team’s high preseason ranking. “We’re not going to know what we’ve lost until we find out what we can do. But at the same time, I think Michigan should have high expectations every year. You don’t do as well some years, well then the expectations probably were too much. It beats the alternative, certainly, but we’re trying to handle it well.”

The funny thing about high expectations is that if you have enough sustained success, you get used to them. After having been dormant for so long before Beilein’s arrival in Ann Arbor, the Michigan basketball program is finally settling in and being comfortable with the expectation of being a perennial contender.

“To be honest with you, after our second NCAA tournament year where we almost beat Duke in the second round, there were high expectations and last year there were even higher expectations,” Beilein said. “They’ve been able to meet them pretty well, but you’re never going to meet all expectations that everyone has.”

For now, Beilein is just focused on championships. A task that starts in Puerto Rico this November.

“We go on the floor as champions,” Beilein said. “We had opportunities to be champions in the Puerto Rico tournament, the ACC/Big Ten Challenge, the championship for our league, the Big Ten regular season, the Big Ten Conference tournament and obviously the NCAA Tournament if we can make it.”

Michigan has a lot of players who can play multiple positions

Michigan’s versatility has been talked about ad nauseam this offseason but recently experienced a resurgence in interest after Michigan’s assistant coaches broached the possibility of Caris LeVert logging minutes at point guard this season.

Being versatile is one thing, but being able to field three different point guards with a six-inch height difference? That’s on another level. The revelation has opened up the imaginations of Michigan fans everywhere, with endless speculation about potential lineups.

Even the perpetually stoic Beilein appeared to be pretty excited about it.

You can almost see the gears turning as the coach talks about the possibilities.

Michigan assistant LaVall Jordan brought up one particular wrinkle the Wolverines’ versatility brings to defensive game-planning: having a bunch of guys who are able to guard multiple positions will cut down on rotations, generally when a team is weakest defensively on a given possession.

“If you can eliminate rotations defensively, it’s always a good thing,” Jordan said. “It’s a game now where everybody’s trying to get you to play close out basketball. From an offensive standpoint, in terms of attacking. If you have guys who can switch and defend, and you can rotate quicker, you can eliminate some of those rotations and not get put in some of those pinches as a defense.”